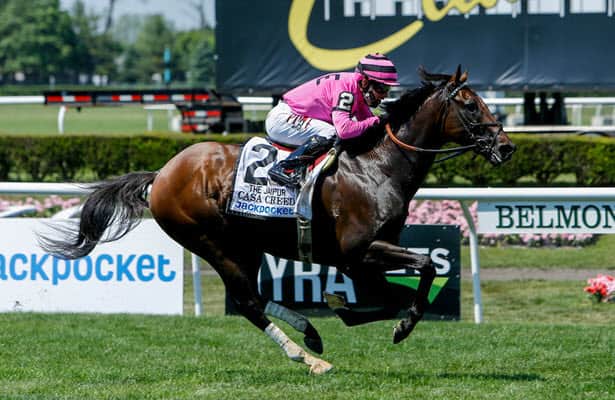 Hall of Fame trainer Bill Mott, a stalwart at Kentucky Downs, is scheduled to start four stakes horses, including Grade 1 winner Casa Creed, in the meeting that kicks off Sunday.

The East Coast-based Mott, the leading trainer at Kentucky Downs in 2005, has had 180 starters at the track through the years and ranks third in career victories with 27. His horses have won $3,107,176 in purse money, according to Equibase statistics.

In the opening-day $750,000 Dueling Grounds Derby, Mott has entered Du Jour, a son of Temple City co-owned by Jill Baffert and Debbie Lanni. Mott won the race last year with Moon Over Miami, who drew into the field from the also-eligible list.

Du Jour returns to the Commonwealth of Kentucky where he picked up his third-straight victory on May 1 in Churchill Downs’ American Turf (G2) on the Kentucky Derby program. He was shifted from trainer Bob Baffert to Mott after the American Turf score and has since competed in two Grade 1 races in New York. He was fourth in the 1 ¼ miles Belmont Derby on July 10 and finished third, beaten 3 ½ lengths, in the 1 3/16-mile Saratoga Derby Invitational on Aug. 7.

Mott said there were a combination of factors involved in the decision to send the colt to the Dueling Grounds Derby, where he will try 1 5/16 miles for the first time.

“The big purse and restricted 3-year-olds,” he said at Saratoga Race Course. “We've got to take advantage of the 3-year-old races while they are available. And the timing was pretty good coming out of his last race. Timing, purse money, conditions in the race.”

Casa Creed, a 5-year-old son of Jimmy Creed, steps back a bit to what may be a better distance when he runs in the six-furlong FanDuel Turf Sprint on Saturday, September 11. The $1 million Turf Sprint is a Breeders’ Cup “Win and You’re In” race and will be broadcast live on NBC.

Usually quite competitive but with one win in 15 career starts at a mile or more, Casa Creed returns to a shorter distance in the Turf Sprint. He won the six-furlong Jaipur (G1) on June 5 at Belmont Park by two lengths at 10-1. Mott scratched him from the 5 1/2-furlong Troy Stakes on Aug. 6 at Saratoga in favor of the G1 one-mile Fourstardave on Aug. 14. Casa Creed came running late to finish third behind the mare Got Stormy, who he will face again in the Turf Sprint.

“He's doing really, really well,” Mott said. “We're anxious, at this point to get back to the six furlongs for that race.”

Mott will have a starter in both divisions of the $400,000 TVG Stakes on Wednesday. The race at one mile and 70 yards was split when 21 horses were entered.

South Bend, the 4-year-old Algorithms colt, will make his second-straight start on turf for the partnership of Gary Barber, Wachtel Stable, Peter Deutsch and Pantofel Stable. He was sixth in the Lure on Aug. 7 at Saratoga and has since turned in a pair of bullet works for the TVG. He drew post 7 in the division, the eighth race on the program.

“The group voted that they wanted to try that,” Mott said. “He's run well on the turf, but he's never won a race on the turf.”

Adele Dilschneider’s Penalty, a 6-year-old son of her 2010 Breeders’ Cup Classic winner and champion Blame, is in the second division of the TVG. He will start from post 10 in the field of 11 in search of his first stakes victory. In his most recent start he was sixth in the G3 one-mile Poker on June 20 at Belmont Park.

“He’s run good at seven-eighths and a mile and this is restricted to horses that haven’t won a stakes this year. So he’s eligible,” Mott said. “The conditions, the distance and the purse money all come into play.”