Mott: Kentucky Oaks ‘on the list’ for Harvey’s Lil Goil 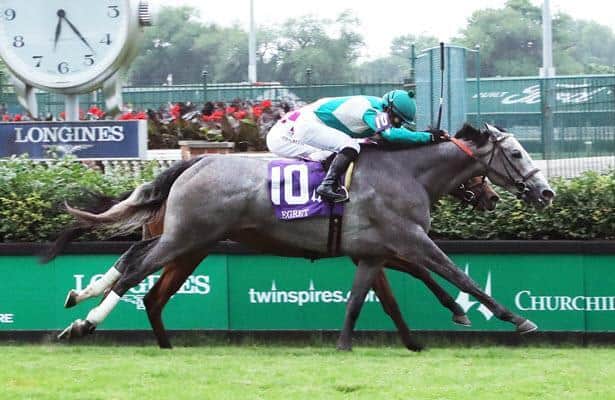 Bill Mott would like to run Harvey’s Lil Goil in the Kentucky Oaks on Sept. 4 after her score in Saturday’s Grade 3 Regret at Churchill Downs, but he’s not sure the timing will work for the rescheduled race.

The Regret, at 1 1/8 miles, was the daughter of American Pharoah’s first win on turf. She broke her maiden at a mile on dirt at Aqueduct in December and then won the Busanda at the same track in February. In her only other effort, she came in 11th in the Fantasy (G3) at Oaklawn Park on May 1.

Harvey’s Lil Goil, owned by the Estate of Harvey A. Clarke and Paul Braverman, has 10 points toward the Kentucky Oaks from the Busanda win, ranking her No. 25 on the leaderboard.

The Kentucky Oaks is “certainly on the list,” Mott said Tuesday. “The thing is, a couple of the other races that I want to run in don’t gel very well timing-wise. We’re interested in the Saratoga Oaks and the Alabama, and we’d like to make one of those races, but they run a little bit close to the Kentucky Oaks”

“We’ll see,” Mott said. “I think we’re going to take it one race at a time and go from there. The Kentucky Oaks is on our radar.”