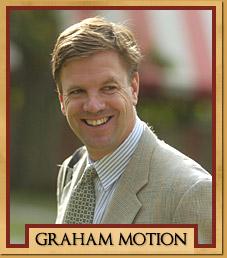 Graham Motion has been on a rampage in recent weeks, winning six stakes races at four different tracks so far in the month of July, including the Grade I United Nations Stakes at Monmouth and Grade II Delaware Oaks in back-to-back days on July 5 and 6.  On Saturday, he brings his East Coast show to the Midwest with the aptly named Interrupted in the Grade III $150,000 Arlington Oaks.

"I'm pleased with her," Motion said. "We've had this race in mind for a while and she's training well.  Part of the reason we're running being that it's graded and a mile and an eighth."

Owned by long-time Motion client Pin Oak Stud, Interrupted is a lightly raced daughter of Broken Vow exiting an efficient victory in the Listed $100,000 Penn Oaks over a grassy mile.  Such was her third in four starts and first since her only failure - a third in the Grade III Florida Oaks in March behind Grade I Breeders' Cup Juvenile Fillies Turf runner-up Testa Rossi and subsequent Grade III Arlington Classic male-conquering Istanford.

Out of the multiple stakes winning turf marathon mare Alternate (by Seattle Slew), she is a half-sister to multiple graded stakes-winner Alternation.  Alternate herself won three stakes, including two editions of Robert G. Dick Memorial at Delaware Park, and placed in five graded stakes on both turf and dirt.  She is also a half-sister to Pin Oak's Canadian Horse of the Year Peaks and Valleys.  Motion trained both Broken Vow and Alternate.

"It's interesting that (Alternation) was a dirt horse.  I definitely think distance is not a problem (for Interrupted).  Whether she goes three turns (like her dam), we shall see," Motion commented. "If anything, I'm a little surprised with how precocious she's been.  She won twice as a 2-year-old.  That's one of the reasons, though, that we have taken it slowly with her."

A victory and positive shipping experience could open more Arlington doors for the charge, as fillies in the past have often gone on to compete in the Hatoof Stakes and Grade III Pucker Up later in the meet.  "I really don't have any big plans with her after this.  I'm taking it a little at a time," Motion explained. "There are certain 3-year-old races out there that would be appealing.  If she can be competitive, that's what we hope for."

Locally based conditioner Ingrid Mason joined the 100-win club at Arlington International Racecourse on Sunday when Dominant Suh won the seven-furlong claiming nightcap for owner Eduardo Condelas.  An ex-jockey who trained her first registered starter in 2004, Mason has become a mainstay at Arlington over the last five years and now won 195 races, overall.

Mason is currently tied for second with veteran Mike Stidham with 21 victories at the 2014 meet and is 10 wins astern Larry Rivelli.  She currently sports a meet strike rate of 33% and has hit the board with her charges an excellent 76% of the time.