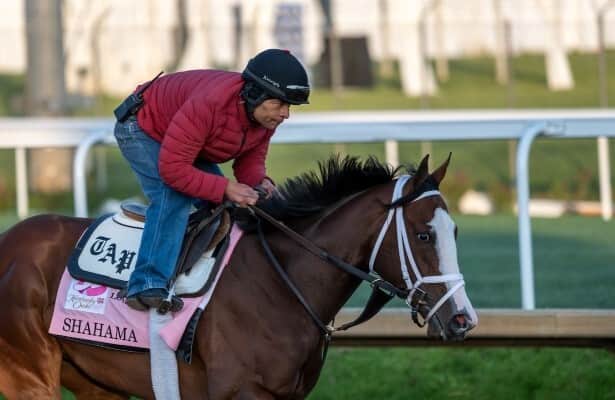 The $250,000 Grade 2 Mother Goose, which will be run on Saturday over a distance of a mile and a sixteenth at Belmont Park, drew a field of five 3-year-old fillies.

All of the fillies in the field have victories in at least one stakes race and that includes a Grade 1 and a Grade 3 winner. Two of them ran in the Kentucky Oaks (G1) and 7 out of the past 15 editions of the Mother Goose were won by a horse that ran in the Oaks, most recently by Untapable in 2014.

Here is a full-field analysis for the Mother Goose with the morning line odds provided by the Horse Racing Nation staff. The Mother Goose is scheduled for 4:40 p.m. EDT and is carded as race 8 out of 10.

1. Shahama (2-1 – Munnings – Todd Pletcher / Flavien Prat – 5: 4-0-0 - $235,984) Shahama began her career winning four races at Meydan Racecourse in Dubai including UAE Oaks (G3) in February. After that she was sent to the barn of Todd Pletcher. Her first start in America was in very deep water in the Kentucky Oaks (G1) where she got far behind in the early going. She did muster a late rally to finish sixth. The Mother Goose provides a small field in which she can prove her quality against this field of stakes winners. Pletcher will be looking for a record-setting seventh victory in the Mother Goose. He won the race last year with Zaajel. Win Contender.

2. Venti Valentine (4-1 – Firing Line – Jorge Abreu / Jose Ortiz – 6: 3-2-0 - $428,750) Venti Valentine finished 14th in the Kentucky Oaks where she had to check hard in the far turn after having good early position. All of her prior races were in New York and include a win in the Busher and a second just a neck behind the Belmont Stakes runner-up Nest. She won her first two career starts at Belmont against New York-bred company. Overall, she prefers to stay close to the early pace as a stalker or presser. Jose Ortiz will ride for the first time for trainer Jorge Abreu whose barn has been uncharacteristically cold and unlucky throughout this Belmont meeting. Use underneath.

3. Midnight Stroll SCRATCH (15-1 – Not This Time – John Terranova / Javier Castellano – 5: 2-0-0 - $83,225) Midnight Stroll broke her maiden at Tampa Bay Downs in her 2022 debut and then she won a stake against Florida-bred company. Both of those victories came on the front-end. Trainer John Terranova sent her to Pimlico for the Black-Eyed Susan (G2) where she had to check in the first turn which sent her to the back of the large field. The daughter of Not This Time has the look of a need-the-lead kind of horse which may be tough to achieve against these fillies. Toss.

4. Gerrymander (3-1 – Into Mischief – Chad Brown / Joel Rosario – 5: 2-2-0 - $240,500) Gerrymander’s career began in New York with two wins and a pair of seconds. She broke her maiden at Saratoga and then was second in the Frizette (G1) behind Echo Zulu. She also won the Tempted at Belmont where Nest finished third. Gerrymander made her first start of the year in the Eight Belles (G2) at Churchill Downs where she finished sixth after a rough start. She is back in New York and had a few fast workouts which is not typical training technique for Chad Brown. She does prefer to press the pace in her races. Use underneath.

5. Juju’s Map (3-2 – Liam’s Map – Brad Cox / Florent Geroux – 5: 3-2-0 - $698,180) Juju’s Map never finished worse that second in five career starts including four as a 2-year-old. She won the Alcibiades (G1) at Keeneland and went on to get the place-position in the Breeders’ Cup Juvenile Fillies (G1) behind the eventual champion Echo Zulu. Trainer Brad Cox did not rush the 2022 debut of Juju’s Map, opting to race on the Kentucky Oaks undercard in an allowance which she won easily. The daughter of Liam’s Map returns to stakes racing as the only Grade 1 winner in the field. Regular rider Florent Geroux stays on board. Top Choice.

Summary: Juju’s Map and Shahama are the two most likely winners of the Mother Goose and they will be the favorites among bettors also. Juju’s Map distinguished herself as a 2-year-old and Brad Cox is turning out quality winners all over the country right now. For the most part, Shahama distinguished herself this year while racing in the Middle East. Todd Pletcher has a way of dominating certain races and the Mother Goose is one of them.

Venti Valentine and Gerrymander have good wins in their past performances but look to be just a bit below the top two. Both are capable of finishing in the exacta and could pull an upset with previous wins at higher odds earlier in their careers.