More time off for Country House, who will bypass Travers Stakes 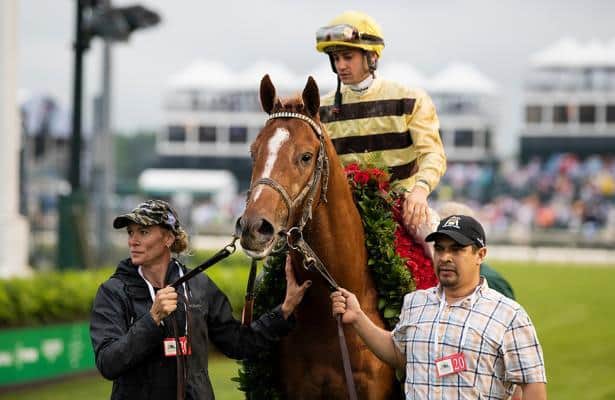 Back at Churchill Downs on Saturday night to receive his engraved version of the 2019 Kentucky Derby trophy, trainer Bill Mott said Country House, promoted to a victory thanks to Maximum Security’s disqualification, will receive “a good two-month vacation” from training.

That, Mott said, counts the son of Lookin At Lucky out of the Aug. 24 Travers Stakes (G1) and longer-term targets such as the Breeders’ Cup.

Country House, of course, spent time at Kentucky’s Rood & Riddle Equine Hospital following his May 4 victory while coming back from a mild sickness that prevented him from going on to the Preakness Stakes.

The colt “was happy” when returned to jogging, but issues arose when galloping began.

“He just wasn’t as eager to get into his training as he had been,” Mott said. “We just felt like he wasn’t moving as well as he should be. We’ve had him checked out again, and I think the determination is we need to give him more time.”

Country House relocated from Churchill Downs to Saratoga this week. There, Mott had originally intended to use the July 27 Jim Dandy (G2) as a local Travers prep.

“I don’t believe we’d be able to get him back to the races in as good a shape right now as what we’d have to have him to run at that very top level,” Mott said. “To give him a fair chance and bring him back as a 4-year-old, we’re going to give him a little extra time.”

Country House finished second to eventual Preakness winner War of Will in the Fair Grounds’ Risen Star (G2), then fourth in the ensuing Louisiana Derby (G2). Connections wheeled him back three weeks later for a third in the Arkansas Derby (G1), qualifying the colt to run on the first Saturday in May.

The owners of Maximum Security, Gary and Mary West, have started a legal battle in hopes of overturning Kentucky stewards’ decision to disqualify their colt, who was first across the wire by 1 3/4 lengths. Given state says all decisions are final, chances of that could be a longer shot than Country House as a 65-1 Derby winner.

Mott will continue to compete for top 3-year-old honors with Tacitus, who finished second in last weekend’s Belmont Stakes as the favorite. For him, the Jim Dandy-Travers double is next.

"He's training at Saratoga right now, and he's doing very well," Mott said. "He's moving well -- looks great. Seems like he's no worse for the wear out of the Belmont."