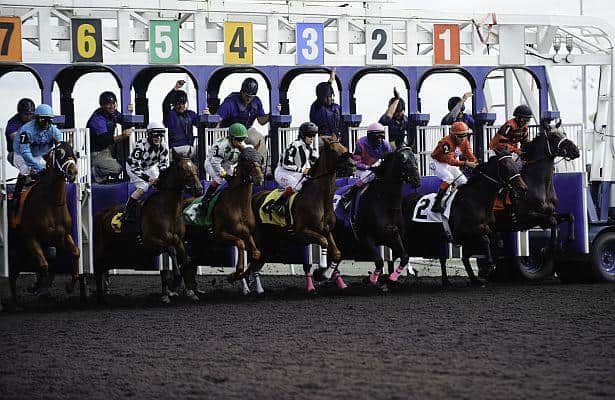 Moran's double included an impressive 2 1/2-length score by Phil's Cocktail in the $201,200 OLG Simcoe Stakes as well as a rallying score in the $125,000 OLG Algoma Stakes with I'm a Kittyhawk.

Jockeys joining Moran and Contreras as stakes winners were Emma-Jayne Wilson with Brooklynsway in the $200,000 OLG Muskoka Stakes, and Justin Stein, who guided Black Hornet to a swift score in the $125,000 Kenora Stakes.

The following are recaps of the day's stakes events.

Favoured Hampstead Heath, trained by Brian Lynch for owner Robert Smithen, with Luis Contreras up, swung out late in the lane to collar pacesetter Blessed One and take the $125,000 OLG Halton Stakes, presented by Tipperary Equestrian.

Blessed One, the only filly in the field of eight, cut out all the fractions, taking her rivals through an opening quarter in :23.65 and the half in :46.48 .  Turning for home over the E.P. Taylor Turf Course, Courtville came to challenge on the outside as the six panels were reached in 1:09.91, while Hampstead had now moved into third behind the leaders.

Contreras then swung out the favourite who hauled down the leader and crossed the wire in 1:33.88 over a very firm turf.  Blessed One held second while Courtville was third.

Trained by Mike DePaulo, the classy six-year-old gelding, was urged off the rail by Luis Contreras through the turn and wore down the pacesetting Power Phil en route to a one-length score. Power Phil stayed on for place over Freitag.  Pender Harbour covered 1 1/16-miles in 1:44.82.

"They were crawling up front and we were in a little bit of trouble, but Luis got him moving and old Pender came through," said DePaulo.

I'm a Kittyhawk, ridden by David Moran, ran down pacesetter Skylander Girl near the wire to capture the $125,000 OLG Algoma Stakes, presented by Adena Springs Canada.

I'm a Kittyhawk settled at the back until being moved up on the inside by Moran as the field rounded the far turn and straightened for home.   Skylander Girl then opened a length on her challengers after Aragorn Ami had faded, but could not hold off the late charge by I'm a Kittyhawk, who scored by one length.  Sweater Weather rallied for third, a neck behind Skylander Girl, while Aragorn Ami was fourth.   The final time was 1:44.19.

"What I was hoping for was the speed that we got today.  That was a big plus for us when I saw how fast they were going.  I said this is good for us because we know our filly will close," said Crean.

Brooklynsway, owned and trained by John Ross, broke her maiden in style with a thrilling stretch run to capture the $200,800 OLG Muskoka Stakes, presented by Equilottery.

Eff Bee Eye, sent to post as the 6-5 mutuel favourite, set splits of :23.04 and :46.11 in the Muskoka with Mel's Ring tracking her early foot from the rail. Quidi Vidi, stalking from third position, battled her way into contention through the turn setting up what appeared to be a two-horse stretch duel.

However, Brooklynsway, with Emma-Jayne Wilson up, kicked into gear deep in the stretch run angling to the rail to find a winning path, 1 1/4-lengths in front of Quidi Vidi. Brooklynsway covered 6 1/2-furlongs in 1:17.73.

The veteran conditioner admitted to having high hopes for Brooklynsway going forward.

"I may have been biting off a little more than I should have with her, but she was doing so well," said Ross of her early stakes efforts. "She's stakes placed twice and now she's a stakes winner. Hopefully she's on the same path as Lexie Lou."

Brooklynsway, bred in Ontario by HJT Racing Stable, banked $120,000 in victory, while improving her career record to 1-0-2 from three starts.

Black Hornet, with Justin Stein aboard, blazed his way to a front-running score in the six furlong, $125,000 OLG Kenora Stakes, presented by HBPA of Ontario.

After an opening quarter of 21.72, Black Hornet, trained by Pat Parente, turned up the heat even moreso, getting to the half in 43.73, while being chased by the slight favourite and defending Kenora champion, Bear No Joke.

Turning for home, the four-year-old son of Pioneering- Start Stinging was four lengths in front and coasted to the wire in 1:08.78, just three-fifths of a second off the Polytrack record while beating Bear No Joke by three and one-half lengths.  Langstaff closed strongly for third, just a nose behind the runner-up.

"I don't know what it was," recalled Parente, about selecting Black Hornet at the yearling sale in 2011 for only $4,500. "Something just caught my eye and we just took a chance on him. He's been sick all spring (this year).  I've been fighting sickness with him and I finally got him right."

Trained by John LeBlanc, Phil's Cocktail put in a stirring performance in the Simcoe, a 6 1/2-furlong 'Poly' sprint.

Ethical Funds broke sharply and set an opening quarter in :22.58 before being joined, on the outside, by Super Colerosa and a rail-skimming Phil's Cocktail to his inside who came on to mark the half-mile in :45.06.

Ever determined, Phil's Cocktail, with David Moran up, put away his fellow pacesetters at the top of the lane and scooted home a 2 1/2-length winner in a final running time of 1:16.78. Entwhistle rallied for place money, a neck in front of Ethical Funds.

Phil's Cocktail, second on debut, broke his maiden impressively last time out by a length over Entwhistle in a six furlong maiden allowance.

"He's been training great all year long and going through the paces very professionally," said LeBlanc.

Phil's Cocktail, bred in Ontario by his owner Ron Clarkson, banked $120,000 in victory, while improving his career record to 2-1-0 from three starts.