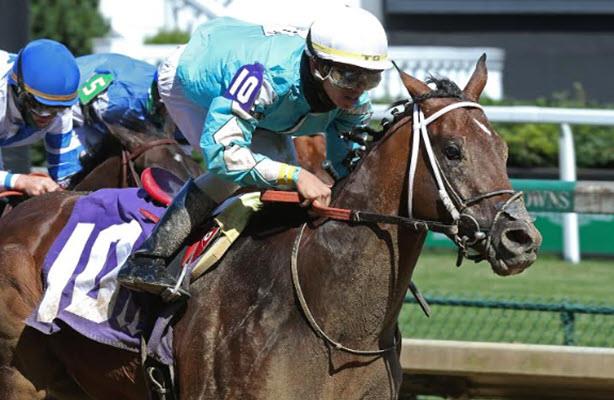 Man in the Can went into the Grade 2 Blue Grass Stakes on July 11 a hot horse, riding a three-race winning streak. The 3-year-old’s momentum stopped that day at Keeneland, where he finished last of 13.

Trainer Ron Moquett said Sunday that another horse stepped on Man in the Can’s hind leg coming around the turn during the Blue Grass. That mishap explains the colt’s sudden drop from fifth place and 3½ lengths off the pace at six furlongs to 13th place and 19¼ lengths back by the top of the stretch.

The Equibase race chart reads that Man in the Can “stopped down the lane” in a race won by Art Collector.

Moquett said jockey Tyler Gaffalione was initially unsure what happened to Man in the Can. The trainer’s team examined him in the barn after the race and saw where he was stepped on.

“He didn’t need any stitches or anything, but it was just enough to mess with us a little bit,” Moquett said. “Now we’re going to go back and let him freshen up and see where we’re at.”

Moquett said he’s not in a rush to bring back Man in the Can, an Arkansas-bred Can the Man colt.

A first-out winner last December at Remington Park, Man in the Can took a pair of state-bred stakes in April and May at Oaklawn Park. He then won an allowance optional claiming event June 12 at Churchill Downs, beating next-out Ohio Derby (G3) hero Dean Martini.

Man in the Can is 6: 4-0-0 lifetime with $213,825 earned for owner-breeder JRita Young Thoroughbreds, LLC. Robert V. LaPenta also co-owns the colt.

“Luckily, he is an Arkansas-bred, so we’ve got restricted races coming early next year,” Moquett said of Oaklawn Park’s meet. “If everything goes perfect, we’d love to run him a couple times more this year. But he’s done a lot.

“He’s a pretty cool, classy horse. The main thing is take care of him and get him back to what he was before the (Blue Grass) and go from there.”

» Horse: Man In The Can
» Person: Ronald E. Moquett