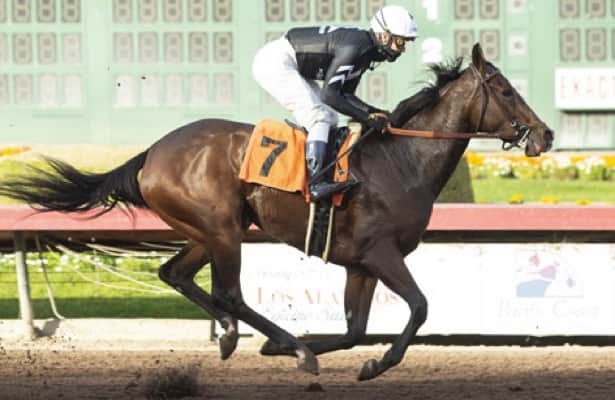 An important prep to the Santa Anita Oaks (G2) on April 3, the Las Virgenes winner will receive 10 Kentucky Oaks (April 30) qualifying points, with four, two and one given to those finishing underneath.

The 4-5 favorite in her first try at two turns, Moonlight d’Oro pressed the early pace and drew off to a solid three-length win going a flat mile on Dec. 13 at Los Alamitos under Flavien Prat, who will ride back in the Las Virgenes. A $620,000 Keeneland September Yearling, Moonlight d’Oro finished a close second as the 3-5 favorite in her five furlong debut Aug. 2 and was then third, beaten 1 1/2 lengths going six furlongs on Nov. 7.

Owned by MyRacehorse and Spendthrift Farm LLC, Moonlight d’Oro is by Medaglia d’Oro and is out of the Bernardini mare Venetian Sonata. With a Las Virgenes-best 87 Beyer Speed figure in hand, she’ll be making her fourth career start on Saturday.

Never worse than third in five starts, Kalypso was second going 1 1/16-miles in the Starlet (G1) at Los Alamitos on Dec. 5 and cut back in distance to register a 1 3/4-length win going seven furlongs in the Santa Ynez Stakes (G2) here on Jan. 3 as the 4-5 favorite. Off at 11-1 in the Starlet, she tired late, calling into question her ability to beat top-caliber competition routing.

Owned by David Bernsen LLC and Rockingham Ranch, Kalypso, a chestnut filly by Brody’s Cause out of the Malibu Moon mare Malibu Cove, got an 81 Beyer in winning the Santa Ynez and retains the services of Joel Rosario.

A gutty nose maiden winner going six furlongs on Jan. 10, the Shelbe Ruis-trained Honor America will stretch out for the first time in her third start and be ridden back by leading man Juan Hernandez. Owned by Ruis Racing LLC, Honor America is by Into Mischief, out of the Honour and Glory mare Honour Isabel. Honor America sold for $250,000 at the Fasig-Tipton Mid-Atlantic 2-year-olds in training sale in May 2020.

Claimed two starts back on Nov. 20 out of a maiden $50,000 claiming win going six furlongs, Doug O’Neill’s Brilliant Cut was then head and head with Kalypso for the early lead in the Santa Ynez and finished third, beaten 3 1/4 lengths. Owned by ERJ Racin, LLC, David Kenney, William Strauss and Dennis and Doug O’Neill, Brilliant Cut will be ridden back by Ricky Gonzalez as she tries two turns for the first time in what will be her sixth start.