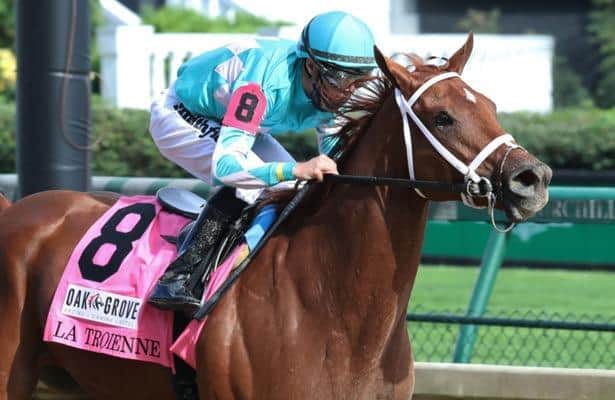 Live coverage will be available with America’s Day at the Races on FOX Sports. Free Equibase past performances for the Cross Country Pick 5 sequence are now available for download at https://www.nyra.com/aqueduct/racing/cross-country-wagers.

The sequence begins in Race 7 at Aqueduct (4:25 p.m. EST) with a seven-furlong allowance optional claiming race for older horses. Dennis Drazin’s multiple graded stakes winning veteran Sunny Ridge, winner of the Withers (G3) in 2016, will try to make amends in his second start off a 12½-month layoff Feb. 4 when finishing a distant fourth. Trainer James Ferraro sends out Letmetakethiscall, who puts a three-race win streak on the line when facing colts.

Eight sophomore fillies assemble for the $150,000 Dixie Belle going six furlongs at Oaklawn Park (Race 6, 4:39 p.m. EST). Hall of Famer Steve Asmussen will saddle Alex and JoAnn Lieblong’s Abrogate, who defeated winners at the same track Jan. 24 after a career debut victory Nov. 12 at Churchill Downs. The daughter of Uncle Mo is out of the Burning Roma mare Hot Coffee and is from the same family as 2010 Champion Sprinter Big Drama as well as Grade 1 winner Sheer Drama. Fox Hill Farm’s Windmill will attempt to replicate her gate-to-wire four-length maiden victory for trainer Larry Jones.

Action moves back to New York for the middle leg of the sequence, where West Point Thoroughbreds’ Black ’n Tan sports blinkers and takes a drop in class for a $20,000 tag in a six-furlong maiden claiming race. The Asmussen-trained son of Elusive Quality last raced for a $40,000 tag and makes his fourth lifetime start. Ask Neal, who previously raced against stakes-placed Overtook and Return the Ring in maiden special weight events, will drop to his lowest level yet for trainer John Toscano Jr. Carded as the finale of the Big A’s eight-race card, the middle leg will have a post of 4:55 p.m.

A field of a dozen Arkansas-bred fillies and mares assemble for the $100,000 Downthedustyroad Breeders’ (Race 8, 5:41 p.m. EST) and is headlined by the Lieblongs’ defending champion Bye Bye J. The daughter of Uncaptured takes blinkers off for Asmussen as she targets her fifth stakes victory. Shortleaf Stable’s The Mary Rose attempts two straight wins after winning a six-furlong allowance Jan. 30 at Oaklawn Park.

Closing out the sequence is the anticipated return of two-time champion Monomoy Girl in the $250,000 Bayakoa (G3) going 1 1/16 miles at Oaklawn Park. Trained by Brad Cox and owned by B. Wayne Hughes’ Spendthrift Farm, MyRacehorse Stable, and Madaket Stable, Monomoy Girl has put together a career ledger of 15: 13-2-0, comprising of seven Grade 1 victories across four different racetracks and more than $4.4 million in earnings. The daughter of Tapizar won two non-consecutive editions of the Breeders’ Cup Distaff, capturing the 2018 running to seal up Champion 3-Year-Old Filly honors. She did the same when taking last year’s Distaff at Keeneland and was subsequently named Champion Older Dirt Female. The Bayakoa will go off as Race 9 at Oaklawn Park with a 6:11 p.m. post.

The minimum bet for the multi-track, multi-race wager is 50 cents. Wagering on the Cross Country Pick 5 is also available on ADW platforms and at simulcast facilities across the country. Every week will feature a mandatory payout of the net pool. The Cross Country Pick 5 will continue each weekend throughout the year. For more information, visit NYRABets.com.