Monomoy Girl to get 'brief break' due to muscle soreness 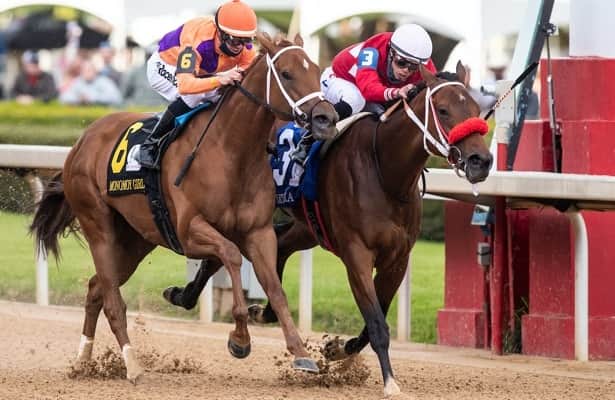 Two-time champion Monomoy Girl will be given "a brief break" at WinStar Farm in central Kentucky after exiting her second-place finish in the April 17 Apple Blossom (G1) with muscle soreness, Ned Toffey of co-owner Spendthrift Farm confirmed to HRN on Friday.

A statement from co-owner MyRacehorse Stable sent to shareholders of Monomoy Girl on Friday noted the decision to give the 6-year-old mare a break came after a "thorough veterinary work-up" by Dr. Wes Sutter of Kentucky Equine Hospital. Monomoy Girl was diagnosed with "minor muscle strains and hamstring soreness," MyRacehorse reported. The 2018 champion 3-year-old filly and last year's champion older dirt female will be turned out for 30 days at WinStar.

"We fully expect Monomoy Girl to return for a second-half of the year campaign and anticipate more terrific performances to come from our wonderful mare," Toffey said.

Trainer Brad Cox was not immediately available for comment.

In the Apple Blossom at Oaklawn Park, Monomoy Girl had the lead in deep stretch, but was nailed on the wire by Letruska to lose by a nose. It was her third official defeat in 17 career starts and just the second time she failed to cross the wire first. In the 2018 Cotillion (G1), Monomoy Girl was DQ'd from first to second for drifting out in the stretch.

The daughter of Tapizar, who won the Feb. 28 Bayakoa (G3) at Oaklawn prior to the Apple Blossom, sports a sparkling record of 17: 14-3-0 with earnings of $4,776,818. The sure-fire Hall of Famer boasts seven Grade 1 wins, including two Breeders' Cup Distaffs and a Kentucky Oaks. She missed all of her 4-year-old campaign after suffering a bout with colic early in the season, which was followed by a muscle pull when preparing for the 2019 Breeders' Cup Distaff.

Last November, Spendthrift purchased Monomoy Girl for $9.5 million at the Fasig-Tipton fall sale and brought in Myracehorse and Madaket Stables as partners.