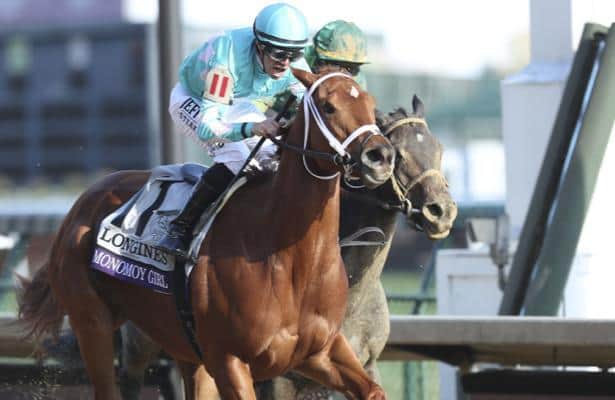 As if Monomoy Girl hadn’t proved herself enough, the 3-year-old filly bested older foes in Saturday’s $2 million Breeders’ Cup Distaff at Churchill Downs, the sight of her Kentucky Oaks win earlier this year.

While Monomoy Girl picked up her fifth Grade 1, leading older filly Abel Tasman faded before even rounding the turn for home.

“I got her into the race this time. She was real lethargic last time,” jockey Mike Smith said of Abel Tasman’s fifth-place run in the Zenyatta (G1). “We thought, let’s get her into the race this time. So I rode her hard out of there. Maybe a little bit too hard. If I had to do anything over again maybe I would have left her and let her make one big run. But I got her up in there and thought, ‘OK, we’re alright. We’re in a good spot.’ Then she just started backing up.”

Monomoy Girl – owned by Michael Dubb, Monomoy Stables, The Elkstone Group and Bethlehem Stables – strung together four straight Grade 1s this season against other 3-year-olds. It would have been five if not for a disqualification in the Cotillion last out.

Cox, who is based at Churchill Downs, has placed his trust in jockey Florent Geroux, who let Monomoy Girl go from the far post of 11 in the Distaff. The pair sat off of Wonder Gadot, who set fractions of 23.39 and 47.57. Abel Tasman was slow to find her stride and jockey Mike Smith had to push her early to get in the race.

As the turn for home came, Monomoy Girl began winding up as Abel Tasman went backwards. Blue Prize was the first to challenge Monomoy Girl, followed by Cotillion winner Midnight Bisou and Wow Cat from last.

Monomoy Girl kept a gap between her and the closers, finishing the 1 1/8 miles in 1:49.79. Wow Cat got up for second over Midnight Bisou and Blue Prize.

“You know,” owner Dubb stated, “I don’t think it struck me how good she was until the Coaching Club (American Oaks) this summer and the way she just went around there. Then I realized maybe this is one for the ages, not just a champion but one for the ages.”

Connections are already considering a big start to 2019 that would give Monomoy Girl a shot at the boys.

Sol Kumin of Monomoy Stables said, “...I think we will take a look at the Pegasus. I think it's a good distance for her. She gets a little bit of a break before the race. Speed favoring track at Gulfstream. She'll get obviously a little bit of a weight break. I think that would be the only race that we would probably look at.”