Monomoy Girl adds to her legacy with strong Distaff win 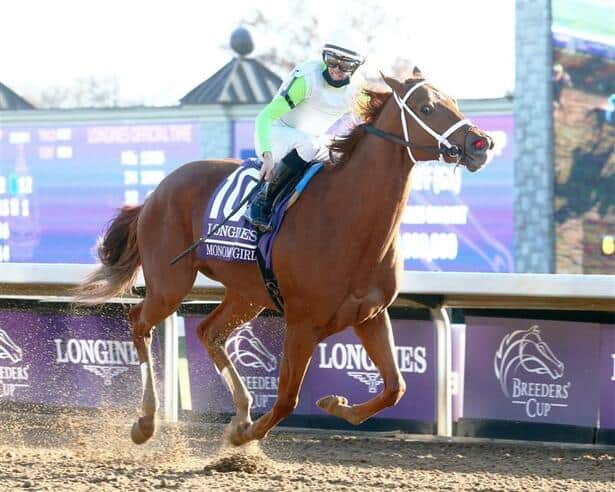 Monomoy Girl cemented her legacy as one of racing's all-time great mares with an authoritative 1 3/4-length win in Saturday's Breeders' Cup Distaff at Keeneland.

It was the second Distaff victory for this 5-year-old champion who won the 2018 edition at Churchill Downs. Her score gave trainer Brad Cox four wins in the 2020 Breeders' Cup, tying Richard Mandella's record.

Monomoy Girl had a wide trip from her outside draw, but jockey Florent Geroux had her comfortable in the clear throughout.

“What a mare, just exceptional, Geroux exclaimed after the race. "She’s a mare of a lifetime, very rare. It’s like finding a diamond. When you have it, you do the best you can. It’s a gift. Even after all she’s been through, being off a year and a half, to come back and still be at the top of her game is unreal. I’m super thankful for the opportunity that Brad and the owners have given me.”

Harvest Moon set the early pace, traveling the first half-mile in 46.03 seconds. She was tracked by Lady Kate and Ollie's Candy with Monomoy Girl in 4th.

Harvest Moon put away Lady Kate and Ollie's Candy turning for home but quickly faced a challenge from Monomoy Girl as Geroux asked her to run.

Valiance made a move into second, and Dunbar Road flew home to nip Harvest Moon for third, but no one was catching the Monomoy Girl, whose winning time for the 1 1/8 miles was 1:47.84.

“Honestly it’s a relief, Cox said after the race. "She means the world to me and it’s a lot of pressure when we run her, I don’t know why. It just is. It’s been a long road back. She’s a real race horse. She’s meant so much for so many people’s lives, she’s an amazing creature. I love her to pieces."

The Distaff was billed all week as a showdown between Monomoy Girl and Swiss Skydiver, but the front-running Preakness winner lost her best chance when breaking a step slow out of the gate. She was far behind early, but made a move into contention turning for home.

For a brief moment it appeared that the anticipated match race could be on as Swiss Skydiver made a huge move up the inside turning for home to briefly get into second place, but she could not sustain her momentum and faded to seventh.

After two huge prices to kick off the late Pick 5, Monomoy Girl delivered as the favorite, paying $4 to win.

This was the 13th win in 15 starts for Michael Dubb, Stuart Grant and Monomoy Stables' daughter of Tapizar. She actually has crossed the wire first in 14 of her starts but was disqualified for interference in the 2018 Cotillion Stakes (G1) at Parx.

Monomoy Girl has seven Grade 1 wins, including two Distaffs and the 2018 Kentucky Oaks. She has won all four of her starts in 2020 after battling colic and a muscle pull and returning from a 1 1/2-year layoff.

She joined Royal Delta, Beholder and Bayakoa as the only two-time winners of the Distaff.