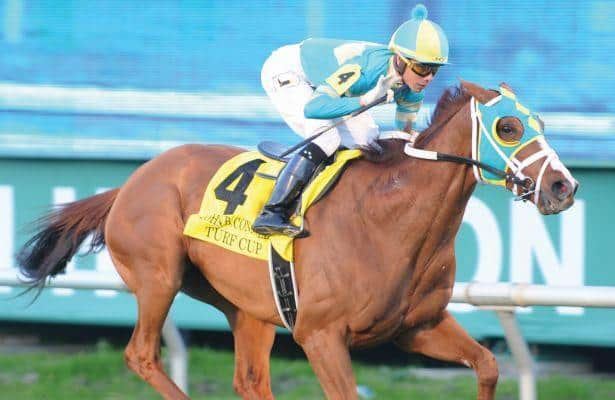 Race 7 at Belmont kicks off the action when a field of nine fillies and mares plus one main-track-only entrant will assemble for a starter allowance event going 1 1/16 miles over the Widener turf course.

Trainer Mike Stidham has enjoyed success shipping horses to Belmont from his Mid-Atlantic base this meet, hitting at a 31 percent clip, and he sends out Tizaprincessa, who breaks from the rail with Joel Rosario up.

Action shifts to the Jersey Shore for the next three legs of the Cross Country Pick 5.

In the second leg, a field of seven will face off in the Grade 3, $150,000 Philip H. Iselin over the main track at Monmouth Park.

Diamond King, second in the Charles Town Classic, is also entered in the Iselin and seeks his first stakes victory since the Federico Tesio at Laurel Park last April.

The $300,000 United Nations (G1) at Monmouth Park is the third and middle leg of the Cross Country Pick 5 and features 2017 winner Bigger Picture.

Trained by Mike Maker and owned by Three Diamonds Farm, Bigger Picture was third in last year's United Nations and enters this year's running of the 1 ½ mile turf event off of a win in the Elkhorn (G2) at Keeneland.

My Miss Lilly seeks her first stakes victory since last year's Gazelle (G2) when she breaks from the rail for trainer Mark Hennig.

Well-bred Pink Sands enters the 1 1/16-mile event over the Monmouth Park main track off of a third-place effort in the Ruffian (G2) at Belmont Park last month.

She is trained by Hall of Famer Shug McGaughey.

The fifth and final leg of the Cross Country Pick 5 is a maiden claiming event for New York-breds over the inner turf at Belmont Park.

A contentious dozen, plus an also eligible entrant and three main track only entrants, will race for a $40,000 tag.

Laughing Manners displayed a much improved effort last out, where he tried turf for the first time and was only beaten by 1 ½ lengths.

The son of D'Funnybone will look to graduate fourth time out for trainer Charlton Baker.

The minimum bet for the multi-track, multi-race wager is 50 cents.

Wagering on the Cross Country Pick 5 is also available on track, on ADW platforms, and at simulcast facilities across the country.

There will be a mandatory payout of the entire pool.