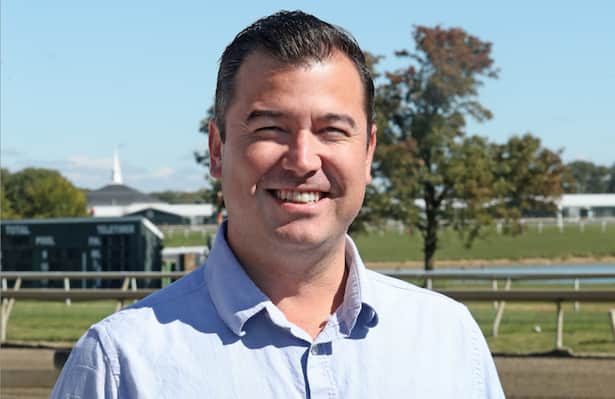 The 41-year-old Griffin also recently was named the track announcer for the Aqueduct winter meet, which runs from January through April.

“We’re pleased to have Chris Griffin join us as our full-time announcer. There has been a tremendous legacy in the Monmouth Park announcer’s booth for the past 50 years, from Bob Weems to Larry Collmus to Travis Stone to Frank Mirahmadi, and we feel Chris will carry on that tradition,” said Dennis Drazin, Chairman and CEO of Darby Development, operators of Monmouth Park.

Griffin has been the track announcer at Parx since April of 2021, filling in at Monmouth Park in Mirahmadi’s absence for the past three years as well. He also serves as the track announcer for the Monmouth-at-Meadowlands meet and will continue in that role going forward.

“It’s an honor. I’m humbled,” said Griffin. “It’s nice when you feel like you have worked really hard to achieve your goals of what you want to do career-wise and where you want to be.

“I have gotten to know some of the people at Monmouth Park over the past three years. To be able to fill in over that time, and to do so for Frank Mirahmadi, someone I respect immensely in this industry and as an announcer, has meant a lot to me. It’s a great opportunity to be able to now get to do this full-time at Monmouth Park.”

Griffin, who hails from Santa Monica, Calif., got his announcing start with the National Hot Rod Association and Harlem Globetrotters, moving on to call races at the Humboldt County Fair in Ferndale, Calif. He has been the announcer for a variety of California fair meets as well as Portland Meadows, Los Alamitos and Gulfstream Park West.

Griffin was named the track announcer at Sam Houston in 2018. He also filled in at the Belmont Park fall meet in 2021.