Monmouth Oaks sets up as a springboard race for Jaywalk 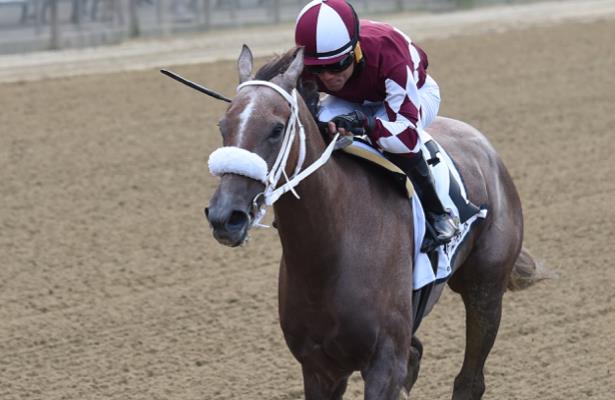 Since Jaywalk made the Delaware Oaks (G3) her first victory of the season, trainer John Servis has seen the reigning 2-year-old champion filly train “very well.” But that’s only while she was able to visit the track.

Running July 6 at Delaware Park came at a cost of more than a week away due to a quarantine there for a local case of strangles. Jaywalk wasn’t permitted in the meantime to rejoin either of Servis’ strings at Monmouth Park or Parx Racing.

“We really just gave her a little paddock time for 10 days there,” Servis said. “I didn’t have any horses (at Delaware Park). She could have stayed there and trained, but I wasn’t going to be comfortable just leaving her there with someone else.”

With Jaywalk back in his care, Servis is confident in the daughter of Cross Traffic heading into Saturday’s Grade 3, $150,000 Monmouth Oaks. It runs at 1 1/16 miles, the same distance over which Jaywalk blitzed her Delaware Oaks rivals by nine lengths.

The flashy gray filly shows just one breeze since then, a five-furlong move on Aug. 3 at Parx Racing. Servis said she two-minute licked last Saturday, too, before shipping from Pennsylvania to New Jersey’s Monmouth Park.

“The only thing that I’m not happy with is that we missed a couple weeks of training with the quarantine,” Servis said. “She’s not a big filly anyway, and it doesn’t seem like it set her back at all.”

Jaywalk, who won four straight races to end her 2018 campaign, including a dominant victory in the Breeders’ Cup Juvenile Fillies, went 0-for-3 to begin 2019. Once disqualified from sixth to 13th for interference at the start of the Kentucky Oaks, connections reevaluated the campaign.

Servis backed off what he was asking from the “dainty” filly in the mornings, favoring long-winded but slower drills over quick works — same as he trained her at age 2. The D.J. Stable and Cash is King runner also dropped in class from the Grade 1 to Grade 3 level.

“If she comes back with another big effort, we’re going to shoot for the Cotillion,” Servis said.

Servis has also unveiled some eye-catching juveniles in recent weeks, with Super John among the most visually impressive.

"That son of a gun," Servis said with a laugh, recounting last week's 19 1/2-length maiden-breaking score. The Super Saver colt wandered severely in the stretch despite lengthening his lead, setting himself up for a try at Monmouth Park's Sapling Stakes on Sept. 1.

The trainer may have another stakes prospect in Mischevious Alex, a son of Into Mischief who broke his maiden June 25 at Parx before returning to be second against winners July 27 at Laurel Park when odds-on.

“He was inside of two horses going into the turn," Servis said. "He saw something, ducked out, almost clipped heels. He dropped out probably 10 lengths back, it looked like he was probably hopeless, and then he came back flying and only got beat a neck.”