Mongolian Saturday back on track after Woodford score 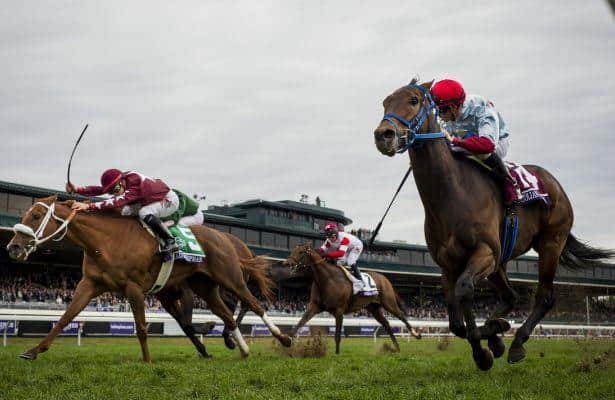 This morning, the 6-year-old Any Given Saturday gelding returned to the track to jog once around.

With Carlos Montalvo aboard for his first victory in two Keeneland starts, Mongolian Saturday won the Woodford by a half-length as the 4-1 favorite in the field of 12. Ganbat said he talked to owner Ganbaatar Dagvadorj of Mongolia last night about the race.

“He was in the countryside where there’s no internet, nothing,” Ganbat said about Dagvadorj. “When he comes back to the city, he will watch the race.”

With yesterday’s victory, Mongolian Saturday improved his record to eight wins in 36 starts and earnings of $1,129,682.

The gelding is to be sent to nearby Hagyard Equine Medical Institute on Tuesday for a check-up before returning to his Chicago base. He had been treated for a stomach ulcer earlier this year.

Ganbat said Mongolian Saturday would fly to California around Oct. 20 to prepare for the Breeders’ Cup World Championships at Santa Anita.

John Oxley’s Classic Empire, who delivered a three-length victory as the 8-5 favorite in Saturday’s Claiborne Breeders’ Futurity (G1), was “tired but good” Sunday morning, according to David Carroll, who is in charge of trainer Mark Casse’s Keeneland string.

Classic Empire gave Oxley his second victory in the race to go with the triumph by Sky Mesa in 2002. The colt is scheduled to join Casse’s string at Churchill Downs this week where the trainer’s Breeders’ Cup horses will have their final preparations before going to California.

W.S. Farish and David F. Mackie’s Irish Jasper was fine the morning after her 1¾-length victory over favored Stonetastic in the Thoroughbred Club of America (G2), said Baldo Hernandez, assistant to trainer Chad Brown. He said the First Defence filly would return to New York this week.

The victory gave Farish his 24th graded stakes win at Keeneland, for which he received a Keeneland Bowl as part of the track’s Milestone Trophy Program. He and Claiborne Farm are the only two owners to reach that level of success here.

Irish Jasper was one of four graded stakes winners yesterday for Brown. At Belmont Park, he sent out Lady Eli to win the Flower Bowl (G1), Practical Joke to take the Champagne (G1) and Camelot Kitten to win the Hill Prince (G3).

Stonetastic is scheduled to return to Monmouth Park on Monday, but third-place finisher Bendable will remain here for a likely start in the $250,000 Lexus Raven Run (G2) for 3-year-old fillies at seven furlongs on the main track Oct. 22.

First was J K Racing Stable’s Mokat, who covered a half-mile on her own in :49.80 with a final quarter-mile in :23.20 for trainer Richard Baltas.

Working next was Del Mar Oaks (G1) winner Harmonize, who worked five furlongs in 1:02.60. Owned by Larkin Armstrong, Harmonize worked in company with Heath and started about 1½-lengths behind and finished 3½ lengths in front with a final quarter-mile in :24 for trainer Bill Mott.

Gary Barber, Michael Ambler and Windways Farm’s Catch a Glimpse, winner of the Breeders’ Cup Juvenile Fillies Turf (G1) here last fall and Canada’s 2015 Horse of the Year, worked a half-mile on her own in :49 with a final quarter-mile of :23.40 for trainer Mark Casse.

Entries for the race will be taken Wednesday. …

With his two stakes victories Saturday, jockey Julien Leparoux boosted his career Keeneland total to 54, a number that ties him with Jerry Bailey for second all time here. Pat Day is the runaway leader with 95 stakes victories. Leparoux won the Claiborne Breeders’ Futurity (G1) on Classic Empire and the Thoroughbred Club of America (G2) on Irish Jasper.