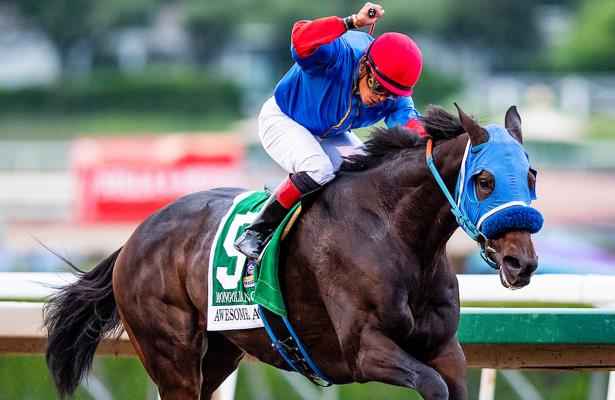 UPDATED: Mongolian Groom, who suffered what an on-call veterinarian called a "serious" injury in the stretch of the Breeders’ Cup Classic, was euthanized later, the Breeders' Cup announced Saturday night.

The statement, in full:

"Mongolian Groom sustained an injury in the Breeders’ Cup Classic today and was immediately attended to by an expert team of veterinarians, led by board certified veterinary surgeon Dr. Ryan Carpenter. During their evaluation at the equine hospital at Santa Anita, they observed a serious fracture to his left hind limb. Radiographs were taken and a complete evaluation was performed. Given the extent of the injury, Dr. Carpenter, in consultation with Dr. Wayne McIlwraith, veterinary surgeon and professor emeritus at Colorado State University, Dr. Rick Arthur, Equine Medical Director of the California Horse Racing Board, and attending veterinarian Dr. Vince Baker, recommended humane euthanasia of Mongolian Groom.

"The death of Mongolian Groom is a loss to the entire horse racing community. Our equine and human athletes’ safety is the Breeders’ Cup’s top priority. We have worked closely with Santa Anita leading up to the World Championships to promote enhanced equine safety. Santa Anita has implemented numerous industry-leading reforms to enhance the existing health and safety measures with the intent of providing a safe racing environment. In addition, Breeders’ Cup always observes the most thorough up-to-date medication practices and restrictions, testing protocols, equine security and surveillance program, veterinary exams, injury management protocols and racing surface testing. These measures are in place to ensure our athletes are racing under the safest and most transparent conditions possible.

"Breeders’ Cup has engaged world-renowned veterinarian, Dr. Larry Bramlage, to conduct an independent evaluation, the results of which will be published when completed. We will continue to keep all stakeholders apprised as information becomes available. We are committed to working with our partners in the industry to continue to advance safety reforms, with the well-being of our athletes in mind."

In the 14-race championships’ final event, Mongolian Groom, who was third at the time of the incident, moved inward a bit toward rival War of Will. The official chart doesn't indicate the two clipped heels, but at that point Mongolian Groom’s left-rear leg suffered an obvious injury.

Scott Palmer, on-call veterinarian for the American Association of Equine Practitioners, termed it as “serious.” Palmer added that the horse's connections are considering "treatment options."

Per veterinarian Scott Palmer: ``Mongolian Groom sustained a serious injury to his left hind ankle. The injury is a serious one. He has been taken to Santa Anita Equine Hospital.'' 2 witnesses told me that Mongolian Groom couldn't put weight on that leg.

A 4-year-old son of Hightail, Mongolian Groom earned his trip to the Classic by way of a Sept. 28 upset of McKinzie in the Awesome Again Stakes (G1). He was making his 17th career start and 11th of the season.

Re: Mongolian Groom, who was pulled up and vanned off about a furlong out from the finish of the #BC19 Classic--Horse has been radiographed and has fractures in the lower portion of his cannon bone and upper portion of his pastern. (ctd)

Ruggles: "It’s obviously a challenging injury. You have to have an honest discussion of what the options are and what the risks are. Hopefully it’s something that can be managed."

This injury occurred against the backdrop of intense scrutiny on racing’s year-end championships, particularly at Santa Anita, where a rash of breakdowns earlier this year made national headlines and prompted a number of new safety protocols.

The Breeders’ Cup laid out further mandates this week, detailing its extensive out of competition testing and frequent veterinary checks on every contender, with each horse supposed to be examined by three vets before approved to run.

A handful of horses were scratched throughout the week by vets, including Imperial Hint, the co-second morning line choice for the Breeders’ Cup Sprint, and Fleeting, an overseas shipper for trainer Aidan O’Brien.

O’Brien told the Racing Post on Saturday that, “We were happy with her and felt she trotted up the way she always does, but the vets weren’t happy with her and we respect their opinion. When you come to these jurisdictions you must abide by their rules.”

"It's something that I think we were all very concerned about coming in," Pletcher said of a potential breakdown on Breeders' Cup weekend. "We were anxious for, not only running in huge races like these, but also hoping that everything would go smoothly and safely and I think everyone took every precautionary measure they possibly could and, like I said, I just, I hope that it's something that (Mongolian Groom) can have a successful surgery for."

"Everything had been going so great," Trainer Bob Baffert said about the Mongolian Groom injury. "You just don't know when it is going to happen. We try to keep them as safe as we can can. We all feel bad about it. It ruins a great moment."