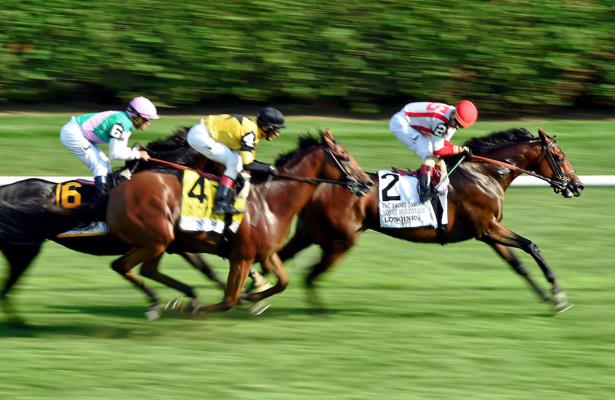 Money Multiplier, last year’s Grade 2 Monmouth Stakes winner, has been looking to get back in the winner’s circle since last summer. The 6-year-old did so Saturday when he repeated his title at Monmouth Park, picking up his first win for Al Shahania Stud.

“I liked where he was the whole time. I know what kind of horse this is,” said winning trainer Chad Brown. “I knew he was in good position. [Jockey] Joe Bravo had him right where he needed to be. This was a really good group for a short field. He beat some good horses. You have to be impressed.”

Previously campaigned by Klaravich Stables, Inc., Al Shahania Stud purchased the son of Lookin At Lucky to race him in Qatar’s Group 1 H.H. The Emir Trophy. Money Multiplier remained with trainer Chad Brown and made his 2018 debut in Grade 1 Gulfstream Park Turf Stakes, where he only managed seventh. He improved to run third in the Emir Trophy.

Back at Monmouth Park, most of the odds were low in a field of five. Although the options were limited, the Monmouth Stakes was full of class. Frostmourne, scratched from the Grade 3 Dixie Stakes Preakness weekend after it was downgraded and moved to dirt, was the 6-5 favorite over Projected, another Brown trainee at 2-1, and Divisidero, also scratched from the Dixie, at 3-1. Money Multiplier went off at 4-1, only ahead of 27-1 longshot Doctor Mounty.

Frostmourne broke from the outside and grabbed an easy lead. Jockey Joe Bravo had Money Multiplier a length back in second followed by Doctor Mounty. There was a length’s gap back to Projected and Divisidero.

With 1 1/8 miles to go on the turf course, Frostmourne covered opening fractions in a comfortable :24.55 and :47.71. Projected and Divisidero geared up before three-quarters of a mile went in 1:11, leaving Doctor Mounty far behind. Frostmourne still looked like a threat turning for home and Divisidero was rallying on the outside. Projected cut to the inside and all three were near Money Multiplier.

Bravo asked his mount to go in the homestretch and Money Multiplier had enough left to get up for the win. Divisidero had to settle for second and Projected beat a tiring Frostmourne for third.

The 2018 Monmouth Stakes marked the fifth win in 22 starts for Money Multiplier, who has been runner-up in Grade 1 races three times. This year’s repeat victory gave him his second stakes win and his share of the $200,000 purse pushed his earnings over $1.2 million.

“He’s a beast,” Bravo said of Money Multiplier. “He’s a Grade 1 horse who deserves all the praise he gets. Turning for [home] he just ran away with it. Chad Brown is the greatest. He let me ride the race. He said to me you might be on the lead. Don’t be shocked. He’s fresh. Let him run his race.’ I got a little concerned when Divisidero came outside of me late. He’s a nice horse. He just made my horse run and he responded the way a good horse does.”