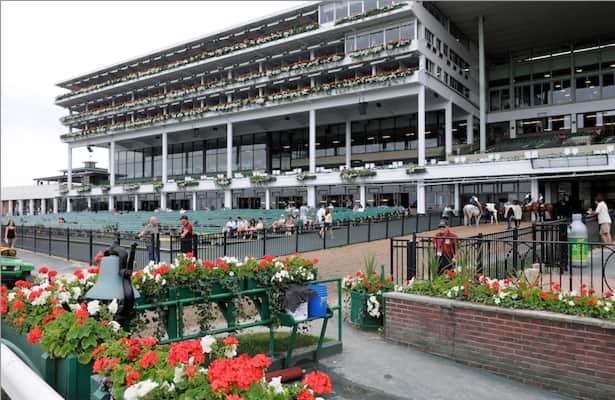 The third installment of the Monday Mid-Atlantic Pick 4, which combines two races from Monmouth Park and two from Colonial Downs, will be an all-turf sequence for Monday.

Monmouth and Colonial are partnering on the new wager every Monday through Sept. 5.

Last week’s Mid-Atlantic Pick 4 returned $4,163 for 50 cents even with favorites winning both legs at Monmouth Park.

Monmouth Park’s fifth race, the start to the sequence, is an optional claimer for New Jersey-bred fillies and mares, 3 and up, at 1 1/16 miles on the turf. The Kent Sweezey-trained Perspicacious, fourth in the Jersey Girl Handicap at Monmouth Park on July 9, and the Graham Motion-trained Kitten’s Collusion, fifth in that same race, lead the eight-horse field.

Monmouth Park’s seventh race is a $30,000 allowance at 1 1/16 miles on the turf for 3-year-olds and up. Trainer Jose Sanchez, 7-for-14 at the Monmouth Park meet, will send out Hellman off a win in maiden special weight company last time out. Leading trainer Claudio Gonzalez has entered God as Love after claiming the colt for $25,000 off his last start on July 30.

A field of nine, plus one also eligible, is entered for the race.

Colonial Downs’ seventh race is a $10,000 claimer for non-winners of two at 5 1/2 furlongs on the grass. A field of 11 has entered the wide-open affair.