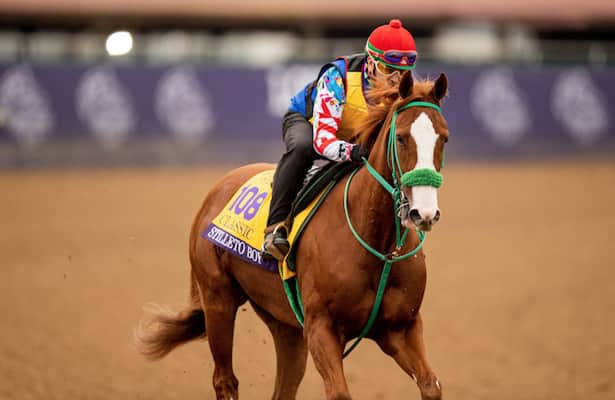 Handicappers assessing the $3 million Pegasus World Cup on Saturday at Gulfstream Park may do well to consider West Coast shipper Stilleto Boy for a slice of the rich pie. The owner-trainer combination of Steve Moger and his brother, Ed Moger Jr., have shown that they can be dangerous – at a price.

The Mogers share a keen eye for a horse. Steve is willing to spend big in an effort to be a major player in marquee races while leaving the rest to training acumen Ed has developed through more than four decades trackside.

Steve made his mark by executing a private purchase of Stormy Lucy for an undisclosed sum. He was richly rewarded when the 6-year-old mare pulled a stunning upset in the 2015 Matriarch Stakes at Del Mar to give his older brother his first Grade 1 victory since he began training in 1976. Stormy Lucy, overlooked at 65-1, returned a whopping $132.80.

Steve also had grand visions for Stilleto Boy when he made a successful online bid of $420,000 to acquire him last summer at Fasig-Tipton’s July Horses of Racing Age Sale. The sophomore had just won the $250,000 Iowa Derby at Prairie Meadows for his second win to go with as many second- and third-place finishes. He had earned $249,675 at that time.

Part of Steve’s thinking was that his brother could take the gelded son of 2011 Preakness winner Shackleford to a higher level. He has not been disappointed.

Hard-trying Stilleto Boy has banked $291,000 while keeping elite company in five starts for his new barn. Among the highlights, he took third in the Shared Belief, ran second to the late Medina Spirit in the Awesome Again (G1), endured a wide trip in finishing fifth in the Breeders’ Cup Classic and sat mid-pack in settling for third behind off-the-charts Flightline in the Dec. 26 Malibu (G1) at Del Mar.

Although Stilleto Boy trailed Knicks Go by 13 1/2 lengths at the end of the Classic and the inclusion of Breeders’ Cup Dirt Mile winner Life Is Good represents double trouble in the Pegasus, the Moger brothers are only too happy to roll the dice. “My brother, what he really wants to do is win big races,” said Ed.

The magnitude of the challenge is not lost on them. “It’s real tough to beat the first two, but he could run third,” said Ed, 65. “And if they happen to not run their race, we could do better than that.”

The purse is simply too big to ignore. Third place is worth $290,000. Stilleto Boy and jockey Kent Desormeaux will break from post 3 as part of a nine-horse field. They are listed at 20-1 in the morning line.

Ed, who competes in Northern and Southern California, does not lack confidence. “He’s a really good horse,” he said. “He looks good. He’s a very healthy horse.”

Stilleto Boy worked three times at Santa Anita in preparation for the 1 1/8-mile Pegasus. That included an impressive five-furlong move in 1:00.40 on Jan. 16 that ranked seventh of 74.

If his horse could somehow shock the world, it would be the most lucrative victory of Moger’s career. According to Equibase, he owned 1,899 victories from 15,196 starts with earnings of more than $34 million through Jan. 27. He has never won a Triple Crown or Breeders’ Cup race.

“I’ve been graded-stakes placed several times but never really had a top, top horse,” he said.

He thinks Stilleto Boy could develop into the horse he has longed for. “He’s just turned 4,” he noted. “This could easily be his best year because of his age.”

As for the gaps in his resume, Moger is not overly concerned. “We’re not done,” he said, clinging to the hope that spurs every trainer.