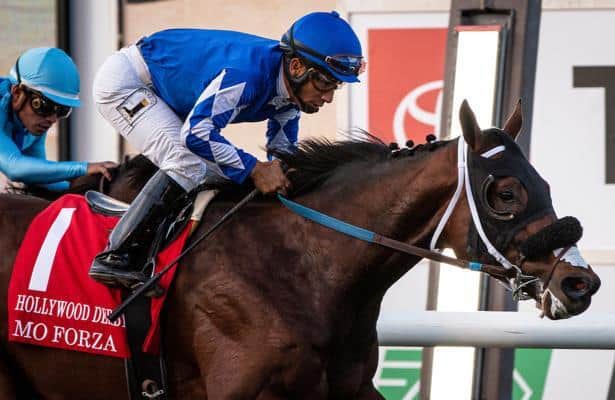 Earlier this month, Mo Forza went from maiden winner to graded hero of the Twilight Derby (G2) at Santa Anita Park. And the rapid ascent continued Saturday when he took on comers from both coasts and won Del Mar’s Grade 1, $300,000 Hollywood Derby.

The 3-year-old son of Uncle Mo bided his time just off the pace before tipped out by jockey Paco Lopez in the stretch. From there, he had enough while in a hand ride to prevail, finishing 1 1/8 miles on turf in 1:48.57.

Peter Miller trains Mo Forza for the partnership of Bardy Farm, his breeder, and OG Boss. The former trainer Barry Abrams has a stake in Bardy, and Miller was emotional after the finish in shouting out Abrams, who watched from home.

Pure excitement from the Peter Miller barn following Mo Forza's win in the G1 Hollywood Derby @delmarracing! Hear about this victory means to their team with @scotttvg: pic.twitter.com/5AF4oebWVY

Mo Forza looked as if he’d made it tight on the rail, lugging in a bit late after edging past Neptune’s Storm. That one, however, had tired after opening up in 23.90 and 48.22.

Chad Brown trainees filled out the order behind them, with Standard Deviation third and Digital Age fourth in a field that included other shippers, such as Uncle Bull (Mark Casse), Henley’s Joy (Mike Maker) and Mr Dumas (John Ortiz).

Mo Forza was bet down to 5-2 favoritism from his 5-1 morning line price, returning $7.60 to win. And a third straight victory’s not bad at all for a colt that took six starts at varying distances to break his maiden after a June 2 debut.

"I’d like to say it was some genius trainer move, but I’d be lying," Miller said. "I’ve always been high on this horse. He’s always shown a lot of ability but it has taken time for him to put it all together, but we knew he had it in him.”

Lopez, who Miller brought to Del Mar this weekend, won the Jimmy Durante (G3) with Alms and the Red Carpet (G3) aboard Zuzanna for a graded triple on Saturday.