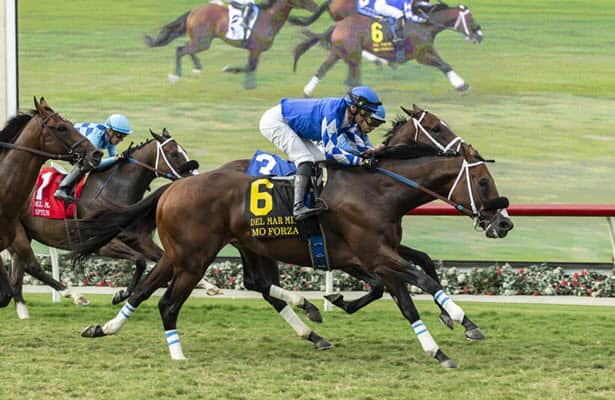 Mo Forza swung widest through the lane and with powerful strides scored his second straight victory in the Grade 2, $300,000 Del Mar Mile, scoring by a head and running the distance on turf in 1:35.03 despite coming off a more than 10-month layoff.

The homebred 5-year-old horse by Uncle Mo, who was the pride and joy of the late trainer/owner/breeder Barry Abrams and now races for his widow, Dyan Abrams, and his friend, Onofrio Pecoraro, was favored in the Del Mar Mile once again and responded well to the guidance of Flavien Prat for his impressive score.

Prat and trainer Peter Miller combined to win the Del Mar Mile last year with the Mo Forza and they clicked once more Saturday.

“He did it last year and he did it again this year, so all the credit goes to the trainer," Prat said. "He broke well and then relaxed nicely for me.  He really responded when I asked him to run and we were in a sprint from the eighth mile pole home.  I knew we got up.”

Finishing second in the five-horse field was Smooth Like Strait, a length ahead of Hit the Road.