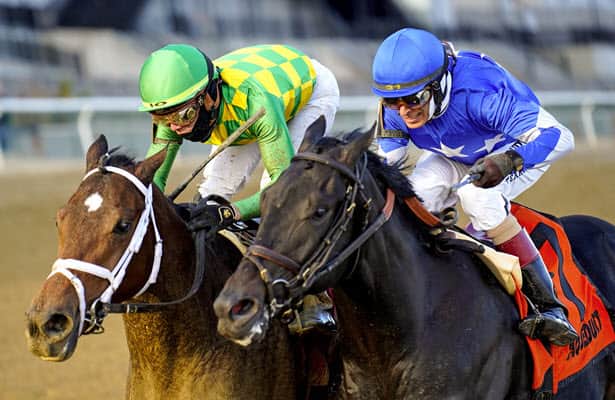 Donegal Racing’s Mo Donegal battled gamely down the lane to best Zandon by a nose in Saturday’s Grade 2, $250,000 Remsen Stakes, a nine-furlong test for juveniles, at Aqueduct Racetrack.

With Irad Ortiz, Jr. up from the inside post, Mo Donegal tracked along the rail in fifth as Fromanothamutha set splits of 25.18 seconds, 51.47 and 1:16.34 over the fast main track under pressure Midnight Chrome.

Zandon, traveling comfortably in third position under Hall of Famer John Velazquez, was asked for his best run around the final turn and took command in upper stretch. Mo Donegal, in need of racing room, was tipped five-wide for the stretch run and rallied resolutely to make the lead inside the final furlong while angling in close to a game Zandon.

The two rivals powered to the wire in tandem with Mo Donegal prevailing by a nose in a final time of 1:53.61.

It was a further 9 3/4-lengths back to Midnight Chrome in third. Rounding out the order of finish were Mr Jefferson, Eloquist, Who Hoo Thats Me, Fromanuthamutha and Judge Davis.

A jockey’s objection by Velazquez and inquiry by the stewards into the stretch run battle resulted in no change to the order of finish.

“We were down the lane fighting in a big race,” Ortiz, Jr. explained regarding the stretch run. “He [Velazquez] was riding his horse and I was riding mine. It was a good race and we got together a little before the wire, but it was a beautiful race. He [Mo Donegal] tried his hardest and I did my best. We got lucky with the head bob and got there.”

Velazquez said his horse put in a winning effort.

“My horse ran a good race - a winning race,” Velazquez said. “Right at the sixteenth pole, he [Mo Donegal] got on top of me and I just missed. He laid on top of me right before the wire and just beat me by very little.”

Ortiz, Jr. said he had no choice but to angle wide for the stretch run.

“I was looking for some room and there were four horses in front of me. So, I had to wait a few jumps and go around,” Ortiz, Jr. said. “It probably cost me a length and a half. He idled a little bit. He’s a young horse and I tried to meet the other horse and keep going. As soon as he got to the other horse, he fought back. He was ready.”

Pletcher, who previously won the Remsen with Bluegrass Cat [2005] and Overanalyze [2012], said he was pleased with the effort.

"I thought he ran great. He was getting a good, ground-saving trip and put himself in a good spot,” Pletcher said. “He kind of had to angle out a little bit and lost some ground there but it looked like when he got there he is still trying to figure out how to polish it off. The other horse battled back.”