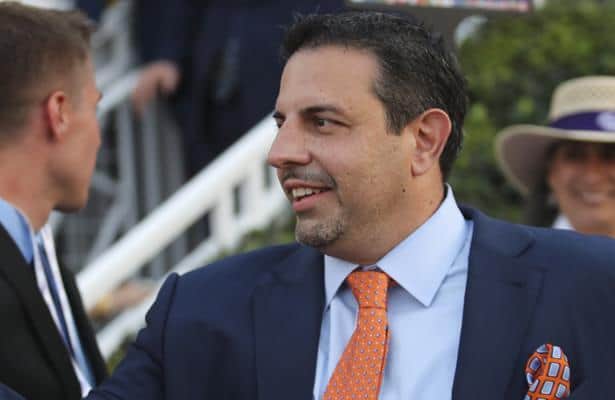 Mike Repole’s hands were moving as fast as his mouth. His delivery may have been frenetic, but his message to fellow owners was unmistakable.

“I wish more owners and more people in the game would think of the sport first, me second,” he said. “Unfortunately, it’s a very selfish sport.”

No one would ever question Repole’s sporting nature. It contributed to his having a financial stake in 25 percent of the eight-horse Belmont Stakes field. The Queens, N.Y., native purchased a minority interest in Mo Donegal from Donegal Racing before the Kentucky Derby. He quickly hopped on board when Todd Pletcher, who also trains Mo Donegal, expressed a willingness to enter Nest, a distance-loving filly, in the Belmont marathon.

“This race is high on his radar,” Pletcher said. “He’s a New York guy and, of course, the Belmont is New York’s biggest race. This is one race he really covets and I’m happy to have him represented in here.”

Mo Donegal, at 5-2, is listed as the second choice after expected pace-setter and Peter Pan winner We the People. He will break from post six with Irad Ortiz, Jr., aboard. Nest, bidding to become the fourth filly to win the Belmont in the “Test of a Champion’s” 154-year history, has post three. She will have Irad’s brother, Jose, in the irons. Both jockeys won Eclipse Awards.

Although Mo Donegal received the dreaded rail and could not overcome that unenviable position in finishing fifth in the Derby, Repole remains confident in that investment. The Wood Memorial winner was sired by Uncle Mo, his 2-year-old champion in 2010. Uncle Mo proved to be star-crossed the following season when a rare ailment forced him to be scratched the day before the Derby. He did not make any of the Triple Crown races.

Repole has been a strong supporter of Uncle Mo at auctions and through a private purchase such as Mo Donegal.

“To be the first son of Uncle Mo to win the Belmont Stakes and to have my silks on that horse, it probably would be very emotional because he never got the chance,” Repole said. “You can only be a 3-year-old in May and June one time in your life and that happened to be the time he was sick.”

Nest is a daughter of two-time Horse of the Year Curlin who placed second to Secret Oath in the Kentucky Oaks in her previous race. Repole noted that the June 25 Mother Goose Stakes (G2) at Belmont Park was the only other logical spot for her next start if they passed on the Belmont.

“She might be 4-5 in the Mother Goose and she might be 8-1 here,” he said. “You have to make sure the filly is good, but then you do things that are right for the sport. It’s just common sense.”

Repole, the son of a seamstress and a waiter, embodies the American Dream. At age 29, he co-founded Glaceau, producer of Smartwater and Vitaminwater, which he eventually sold to the Coca-Cola Company for $4.1 billion.

He has invested heavily in racing and has long said that he prizes major New York victories above all others. He said of the Belmont, “This has been a dream race of mine since I was a kid. I didn’t know where Kentucky was.”