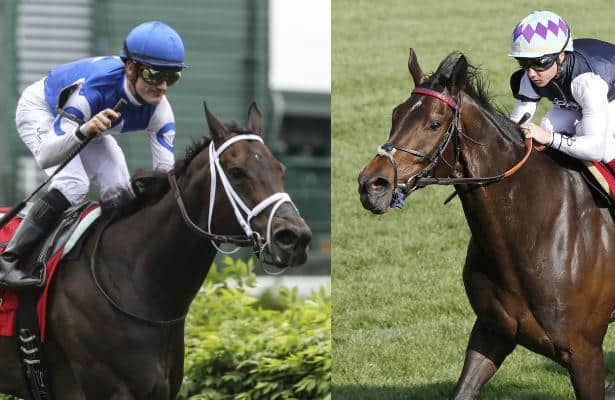 Trainer Graham Motion twice opted to avoid Tepin, the reigning Breeders’ Cup Mile winner and female turf champ, by running against males at Keeneland. The result was a pair of Grade 1 victories in the Maker’s 46 Mile in the spring and most recently the $1 million Shadwell Turf Mile. Tepin ran at Keeneland the same days in Grade 1 races for fillies and mares, taking the Jenny Wiley and having her eight-race win streak snapped with a second to front-running Photo Call in the First Lady.

"We have to face the music, and I think this is the right time to do it. It goes beyond Tepin. It's a very deep race, but she's still the horse to beat. I have the utmost respect for Tepin. She's got one chink in her armor, and that was last time out. She probably got caught up in what was an awkward pace scenario, an awkward pace. Even the best can get caught up in that.”

“Miss Temple City made Tepin’s experience a lot easier going over to Ascot,” said Norman Casse, who oversees the training operation at Churchill Downs, Saratoga and Florida’s Palm Meadows training facility for his dad, Mark Casse. (Tepin doesn’t go anywhere Norman Casse isn’t.) “They rode the plane together. Tepin is usually a loner, as far as horses go, though she likes the stable pony. When Miss Temple City would go out to the round pen or to the paddock for the day, Tepin would holler at her. She’d holler at her when she came back. They’d look at each other, became really good friends because of the flight and traveling together.

“And Miss Temple City likes her, too. They wouldn’t actually gallop together. But they’d train in the same set and we’d follow Miss Temple City. She kind of showed us the ropes in England. Tepin really liked her, and we appreciated the help from Graham and his team. We wouldn’t have known what to do over there at all. We went over there with another outfit that we really love and respect, and they helped us do something nobody has done before.”

Photo Call also is in the Mile against males, with trainer Todd Pletcher likewise opting for the shorter distance than the 1 1/4-mile Filly & Mare Turf. The BC Mile includes five horses out of the Shadwell, including runner-up Ironicus (beaten a head) and third-place Tourist (who lost by a half-length).

“One of our partners put it perfectly,” said Seajay managing partner Don Giffen of Louisville, referring to Mike Kregor, “He’s a golfer. He said, ‘Hey, if you win the U.S. Amateur, you have a tee time in the Masters. You don’t turn it down. No amateur has won the Masters; your chances of winning are not very good. But you’re not going to turn down the chance the play. You’ve earned the right to play.’ And we kind of feel like we’ve earned the right to play.”

That’s because Spelling Again won Gulfstream Park’s Grade 2 Princess Rooney, a July 2 Breeders’ Cup “Win and You’re In” race where the winner got her entry fees paid and a $10,000 travel stipend.

Since being claimed for $40,000 at Santa Anita 1 1/2 years ago, Spelling Again has won two other stakes, including Churchill Downs’ 2015 Open Mind and Grade 2 Chilukki. The 5-year-old mare has not been at her best since the Princess Rooney, with a seventh, fifth and sixth in three starts. But she’d lost four races heading into the Princess Rooney.

“Every horse owner has an excuse,” said Giffen, a 63-year-old Louisville banker. “We can look at her last few races and come up with an excuse. She’s beautiful, she’s working great, strong. It’s a little bit like full circle for us. Last May, we got her out of Santa Anita. We’re hoping for a repeat of her gutty performance in Florida, and if she does that, I think we could have a respectable showing.

“She’s had some tough races. She’s been beat up a few times around the course, out of the gate, in the turns. … I’m not making — I guess I am making owner excuses — and say, well, who knows? There’s not a horse in there that can run an average race and win. They all have run good races. I think if we run our best race and the more-accomplished horses don’t, we can beat them. That’s why they put them in the gate. I know we’re going to be a long shot. But we went into this business looking for an experience, not money. So this is the ultimate experience.”

Seajay, which also includes Dennis Lynch of Lexington and Giffen’s son Matthew, was formed with the acquisition of Spelling Again. However, the partnership’s roots trace back 45 years ago to when the principals were students at the University of Kentucky and working as ushers at Keeneland. Their fantasy was to someday have a horse that could race at Keeneland.

“The thrill of owning a racehorse that comes along the finish line first is indescribable and probably cannot be duplicated in anything else,” Giffen said. “It’s like owning your own mini-sports franchise. This has been as fun a ride as you can imagine.”

Brad Cox earned a second Breeders’ Cup starter with Green Mask drawing into Saturday’s $1 million Turf Sprint. The 5-year-old gelding was the second also-eligible, meaning he needed two defections to get into the capacity 14-horse field. That came Thursday when Europe’s Suedois was scratched with a stress fracture and trainer Kiaran McLaughlin said Lady Shipman, the first also-eligible, instead will run in an undercard stakes.

You think the competition to get in the field wasn’t fierce? Lady Shipman was second in last year’s Turf Sprint by a mere neck to victorious Mongolian Saturday and Green Mask was another half-length back in third.

Green Mask, previously trained by Wesley Ward, was turned over to Cox this spring. Second by a neck in stakes at Saratoga and Woodbine, the son of Mizzen Mast won a Belmont allowance race before finishing a close third in the $150,000 Belmont Turf Sprint to earn a shot at the Breeders’ Cup.

“I’m super-excited about him drawing in,” Cox said. “Obviously we wanted to run or we wouldn’t have put him on the plane. He flew in from New York Sunday; we entered Monday. So we knew it was kind of iffy getting in the body of the race.”

Julien Leparoux, fresh off his 11th Keeneland riding title and who spent a couple of years in California before returning to a Kentucky base, is back on Green Mask. The jockey has that close second in the Woodbine stakes and Keeneland allowance victory on Polytrack in 2014 in two races with the gelding.

“He’s really a tough horse to ride,” Cox said. “You’ve got to get your timing down and can’t make your move too early. He kind of waits on horses when he gets in front. Julien put a good ride on him in Canada. That day he got beat a neck and as soon as they crossed the wire, he gallops out in front — not that you get paid for galloping out. But I’m excited about him.”

By drawing in, Green Mask will break from post 14. While the Breeders’ Cup Turf Sprint at Keeneland was at 5 1/2 furlongs, the race will be 6 1/2 furlongs over Santa Anita’s downhill course where horses cross the main track onto the homestretch of the turf course proper.

“Obviously I never run a horse here down the hill,” Cox said. “But they say being on the outside is where you to be.”

Trainer Dale Romans, who will saddle morning-line favorite Not This Time in Saturday’s $2 million Sentient Jet Juvenile, on Friday was sporting a colorful super-sized jacket from Mongolia. The garb was a gift from the connections of 2015 Breeders’ Cup Turf Sprint winner Mongolian Saturday, whose trainer (Enebish Ganbat) and owners (Mongolian Stable) are from the East Asia country that borders China and Russia. Romans said they had the turquoise, gold and red jacket made just for him and that he might wear it for Saturday’s races.

The Not This Time and Mongolian Saturday teams have become friendly while stabled by each other in Santa Anita’s massive Breeders’ Cup barn.

“It brings the world together,” Romans, a product of Louisville’s South End, said of horse racing at the top level. “Especially in such a contentious political environment. People are people all over the world, that’s what it boils down to. Horse racing is the great equalizer. It’s where billionaires and grooms hang out together, Mongolians and hillbillies. We all come together.”