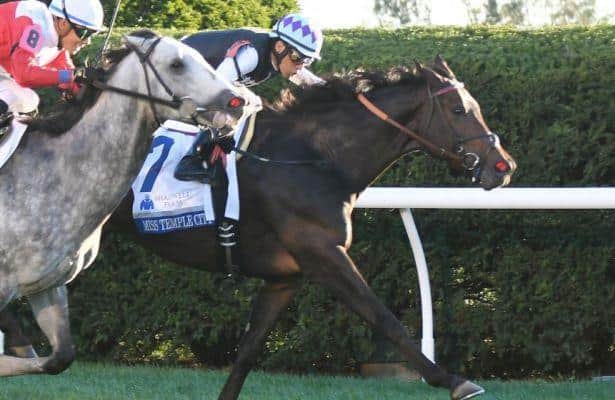 Photo: Jessica Morgan/Eclipse Sportswire
The Club Racing, Needle in a Haystack and Sagamore Farm’s Miss Temple City, who last year became the first filly to win the Maker’s 46 Mile (G1) and Shadwell Turf Mile (G1), will attempt to become the third horse to repeat in the Shadwell when she faces 13 rivals in the 32nd running of the $1 million race.
The Shadwell Turf Mile is the centerpiece of a star-studded 10-race program Saturday that features five graded stakes of which three are Grade 1s. Other Grade 1 races are the 20th running of the $400,000 First Lady for fillies and mares going a mile on the grass and the 104th running of the $500,000 Claiborne Breeders’ Futurity for 2-year-olds going 1 1/16 miles on the main track. Saturday’s 10-race program begins at 1:05 p.m. ET.
The Shadwell Turf Mile, which goes as Saturday’s ninth race with a 5:45 p.m. post time, is a “Win and You’re In” race for the $2 million Breeders’ Cup Mile (G1) to be run Nov. 4 at Del Mar.
A three-time Grade 1 winner, Miss Temple City enters the Shadwell Turf Mile off a victory in the Ladies Turf (G3) at Kentucky Downs on Sept. 9. Trained by Graham Motion, Miss Temple City will be ridden by Edgar Prado and break from post position eight.
The previous repeat winners of the Shadwell Turf Mile were Gio Ponti (2010-2011) and Dumaani (1995-1996).
Also shooting for a piece of Keeneland history in the race is WinStar Farm’s American Patriot.
Trained by Todd Pletcher, American Patriot will attempt to join Wise Dan (2014) and Miss Temple City (2016) as the only horses to win the Maker’s 46 Mile (G1) and Shadwell Turf Mile (G1) in the same year.
Joe Bravo will ride American Patriot and break from post position 14.
Back to challenge Miss Temple City and American Patriot is Terry Hamilton’s Heart to Heart, runner-up in the Maker’s 46 Mile the past two years. A two-time Grade 2 winner and seven-time Grade 3 winner, Heart to Heart is trained by Brian Lynch and will be ridden by Florent Geroux and break from post position 10.
Other Grade 1 winners in the field are Gunpowder Farms’ Divisidero, a two-time victor of the Woodford Reserve Turf Classic at Churchill Downs, and Geoff and Sandra Turnbull’s Mondialiste (IRE), winner of the 2016 Arlington Million and fourth-place finisher in last year’s Shadwell Turf Mile.
Julien Leparoux will ride Divisidero from post two. Feargal Lynch has the mount on Mondialiste and break from post position seven.