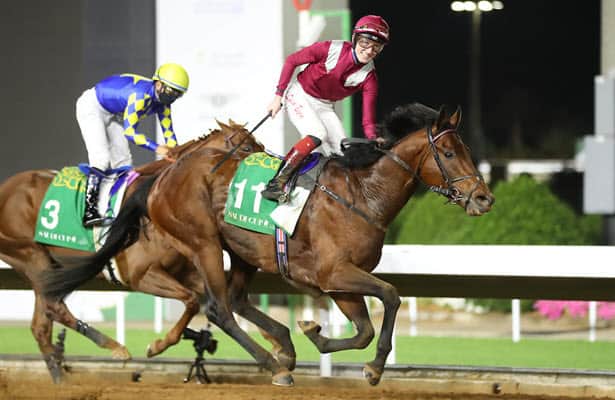 It looked like a match race early between the American favorites Charlatan and Knicks Go. In the end, though, it was the British horse Mishriff who won a riveting second edition of the world’s richest race.

Despite finishing second, the race signaled a complete comeback from an ankle injury that took the lightly raced Charlatan out of contention for the 2020 Triple Crown.

“He ran too good to lose,” trainer Bob Baffert told HRN in a text message from California. “Very proud of his effort.”

Trained by John Gosden and ridden by David Egan, 21, England’s 2017 champion apprentice jockey, Mishriff had not raced since his disappointing eighth-place finish last fall in the British Champion Stakes (G1) on soft turf at Ascot. That ended a three-race winning streak, including two Group 1s.

“He ran well here last year and through the year except for at Ascot on bottomless ground,” Gosden said from England. “He didn’t like that ground. Otherwise he has a superb record.”

“Last year in the Derby, if he hadn’t missed the break a jump slow, he nearly would have beaten the Japanese horse,” Egan said on the Saudi Cup telecast. “It’s redemption for him in Saudi.”

Perhaps making a comparison to U.S. tracks, where he trained full-time in the ’80s, Gosden offered praise for the Saudi dirt course – not to mention the resilience of Mishriff.

“I think there are very few horses that can switch surfaces like that,” he said. “I have always been told by the top American jockeys and by Frankie Dettori that this is the best main dirt-sand track in the world. So many of the tracks are too loose with horrible kickback, but this is a very good test for the Thoroughbred.”

Charlatan, with jockey Mike Smith, and Knicks Go, with Joel Rosario, established the pace for the race, running eyeball to eyeball to the turn. The whole time Egan patiently kept Mishriff on a wide path but within striking distance.

“Just up the straight when the two leaders kicked, it just took him a little while to get going,” Egan said. “Thank God he ran them home.”

Mishriff passed Knicks Go into second in the last three furlongs, leaving Brad Cox’s colt unfulfilled in his bid for a fifth straight victory. Then it was between him and Charlatan, who did not give up willingly in what seemed like a never-ending, quarter-mile homestretch.

“Turning for home we knew they were going pretty fast early,” Baffert told the Saudi Cup media team. “He’s a fast horse, but that stretch. I’m glad we don't have any stretches like that in America.”

It was the first time in his five races that Charlatan did not cross first. If not for a failed drug test after he had apparently won one of the two divisions of last May’s Arkansas Derby (G1), the 4-year-old colt by Speightstown would have been undefeated going to the Middle East.

The race was run in dry weather after a wet afternoon at the King Abdulaziz Equestrian Field. The post-time temperature was an unseasonably cool 54 degrees.