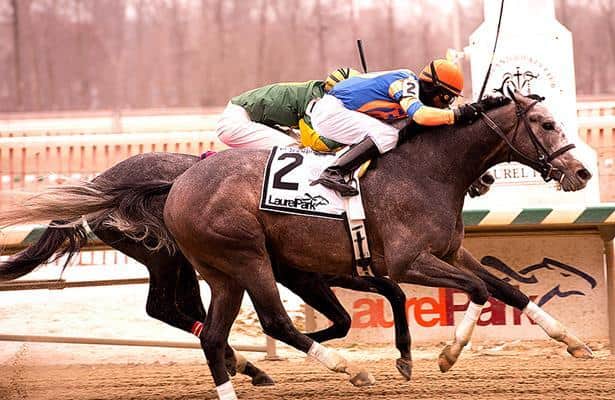 Racing for the first time in Maryland, Repole Stable’s Misconnect made a dramatic late surge in the final 50 yards to catch Cutty Shark at the wire and win the $250,000 General George Handicap (G3) by a neck Monday at Laurel Park.

The 37th running of the General George for older sprinters was one of three stakes on the special 10-race Presidents Day holiday card at Laurel, along with the $100,000 Miracle Wood and the $100,000 Wide Country.

“The horse is doing great,” Levine’s assistant Fernando Callejas said. “He ran long the last two times out and we know he has natural speed. Watching the earlier races today, we knew we wanted to stay away from the rail. The inside looked dead today. Horses were winning from outside and he came hard from the outside at the finish.”

Zee Bros, winner of the Frank J. DeFrancis Memorial Dash last November in his only previous start at Laurel, broke sharply from post 5 and took the field through a quarter-mile in 23.40 seconds with Laurel-loving Smash and Grab right behind before dropping back after a half-mile in 46.87.

Boyce put Cutty Shark in contention as the field turned for home and opened up a clear advantage in mid-stretch while Misconnect launched his bid on the outside. Misconnect gradually wore down a stubborn Cutty Shark as they approached the wire and edged to the front in the shadow of the wire.

“My horse broke really well and I thought if I kept him close he would finish the last eighth of a mile and win,” Carmouche said. “But, I knew I had to keep him close. If you look at his races, he only wins from the sixteenth pole. If he’s in contention he will win, but if he’s too far off he won’t make up distance.”

“I got excited for a while,” Boyce said. “We had a great trip and when I saw an opportunity to make my move, I did. He really took off in the lane, but the last few yards I saw that other horse coming and we were second-best. My horse ran a great race.”

“Mr. Levine had him ready and this horse was ready to win,” Carmouche said. “Usually at this track you can come from off the pace, but the track didn’t have that bias today. Horses were winning from going wide and being close to the front. I had to keep him in contention. Coming down the stretch, I knew I could run [Cutty Shark] down.”

Headed by Combat Diver in mid-stretch, Savvy Street came back again as they dueled to the wire and prevailed by a nose in the $100,000 Miracle Wood for 3-year-olds.

Under Forrest Boyce, who rode regularly in Maryland before moving her tack to Fair Grounds for the winter, Savvy Street ran one mile in 1:40.36 on a fast main track and paid $8, $4.40 and $2.20.

“He broke really well today,” Boyce said. “I wanted to take him back and get settled but we kind of got in a lot of traffic after that decision and it took a little while for us to work through it. He had a clear lane at the top of the stretch and he was really coming on at the end. It looked like there were horses everywhere in front of us, but we got to our spot and he really dug in to win the head bob. It’s really great to be back on him. I’ve always thought a lot of this horse.”

Combat Diver ($4.60, $2.80) held on for second in a four-horse finish a neck ahead of 4-5 favorite Golden Years ($2.10). It was another head back to Bodhisattva in fourth, as Measured and Governmentshutdown completed the field.

Savvy Street stalked a pace of 24.94 seconds, 49.15 and 1:14.55 set by Bodhisattva and moved to the front entering the stretch as Combat Diver, exiting the Remsen (G2), circled the field on the outside. They quickly hooked up and battled to the wire, with Savvy Street emerging with his third win in five starts at Laurel.

“It went like I planned it,” trainer Donald Barr said. “I wanted to bring him off the pace a little bit and Forrest is the best at that. It was a tough race, but my horse has been improving over time.  I’m excited to see him go two turns. This is his last one-turn race. We hope to go to Pimlico and see what happens.”

Gypsy Judy reeled in pacesetting Hot City Girl in the last of seven furlongs and pulled clear to a 3 ¼-length victory in the $100,000 Wide Country for 3-year-old fillies.

It was the second straight win for the chestnut daughter of Kitalpha, ridden by Horacio Karamanos for trainer Robin Graham, following her maiden victory on January 8 at Laurel. She completed the distance in 1:25.75 and returned $14.80, $6.60 and $4.20.

“I’m really thrilled for this filly,” Graham said. “She has been doing everything perfect in the morning. She really learned a lot from her maiden win. She’s been like a different horse. The post position was perfect for her today and the race developed like I hoped it would. She was in a perfect position and when she was asked to run she really responded well. This track probably favored her style a little bit today.”

“She did well today,” Karamanos said. “She broke well. When we turned toward home, [Hot City Girl] made me swing so wide. That took a toll, but I think it hurt her, too. We know this filly has a lot of improving to do, but she’s a good horse and she showed that today.”

Notes: Based last winter in Florida, Carmouche has three wins and purses of $245,850 from just six starters at Laurel. “This was a good field and I’m so happy to have won. Since I moved [here], I’m very grateful for the opportunity to do this job well,” he said. … Jockey Sheldon Russell moved to 997 career victories with a pair of winners on Monday. He was first with Start Swinging ($4.40) in the second race and Peppermint Prince ($9.60) in the fourth. … Live racing returns to Laurel Park on Friday. Post time is 12:30 p.m...Laurel Park's President Day program was up $1 million over the previous year.