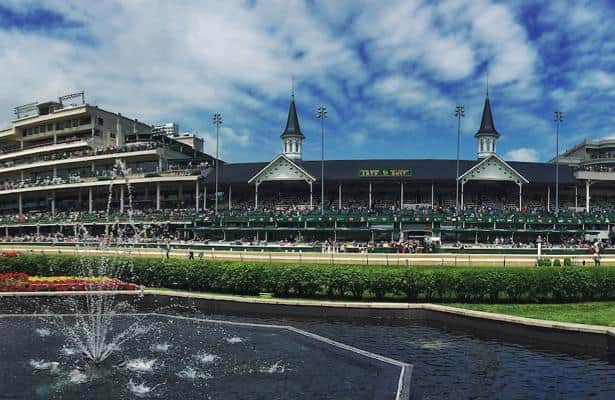 Mintd ran down 1-2 favorite Juliet Foxtrot in deep stretch to score a half-length victory at odds of 12-1 in Saturday night’s 45th running of the $150,000, Grade 3 Mint Julep Stakes before a “Downs After Dark” crowd of 19,634 at Churchill Downs.

Long shot Flash n’ Dance led the field of eight fillies and mares through early fractions of :23.90 and :48.66 as Juliet Foxtrot tracked from second with Hendy Woods in the clear in third and Mintd rated along the inside in fourth.

Juliet Foxtrot, who previously won the Jenny Wiley (G1) at Keeneland nine weeks ago, put away the pacesetter while leaving the far turn in 1:13.41 for six furlongs. The odds-on favorite spurted clear at the head of the stretch but Mintd was determined down the lane, drew within a half-length of Juliet Foxtrot at the 16th pole and put her away in the final yards for the win.

“Brendan and his team were very confident in this filly today, which gave me a lot of confidence as well,” Santana said. “I tried to keep her close to the early pace and we had a great trip.”

Juliet Foxtrot faltered in the Mint Julep for the second year in a row after finishing sixth in 2020. “She ran a good race, and we ended up being second best tonight,” said Juliet Foxtrot’s trainer, Brad Cox.

This was the first stakes win for Mintd, who previously won a one-mile turf allowance at Churchill Downs on April 30.

“It was a tough field on paper with a lot of nice fillies and mares entered,” Walsh said. “This horse has been very progressive in her development. She ran a great race on Kentucky Oaks Day and had a beautiful breeze over the turf (at Churchill Downs). I thought we had a good chance against some very nice fillies and Ricardo gave her a fantastic ride.”

The $90,210 first prize jumped Mintd’s earnings to $183,432 with a record of 4-2-0 in nine starts. She is owned by the partnership of Bradley Thoroughbreds (Peter R. Bradley III), Madaket Stables LLC (Sol Kumin), Team Henley (Eugene Henley) and Tim and Anna Cambron.

Mintd is a daughter of Olympic Glory out of the Raven’s Pass mare Lisanor and was bred in Ireland by Joe and Edel Banahan and Micheal Smith.