Mind Control gets a break to prepare for 2022 campaign 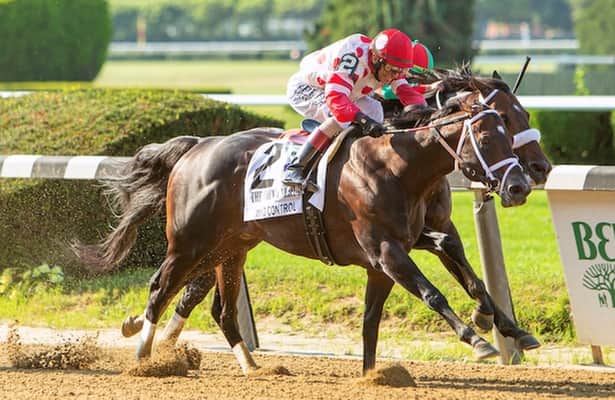 Mind Control, who missed the Breeders’ Cup Mile after developing a fever, will winter at Red Oak Farm in Ocala, Fla., before pointing to the 2022 Carter Handicap (G1).

Sacco said that after missing the Breeders’ Cup, Friday’s Cigar Mile (G1) was not an option.

“He lost a little bit of weight. And to prepare for such a race like that, a Grade 1, off of the flight back from California, we just would be asking too much. And we're just going to let him do what we do with him every single year, which is turn him out. He has his own paddock here at Red Oak farm. And we will get him ready for next year. We can't push the envelope at this point.”

Sacco said Mind Control might prep in New York ahead of the Carter, which is held in late April.

“They have some nice prep races there in New York before the Carter. So we will point for the Carter and hopefully get a prep race into him before that. But that's our schedule.”

Mind Control, switched earlier this year to trainer Todd Pletcher from Rick’s brother Gregg, finished second to Mischevious Alex in this year’s edition of the Carter.

Under Pletcher, Mind Control won the John A. Nerud (G2) and the listed Parx Dirt Mile, with a fourth-place finish in the Forego (G1) in between.

“The horse is sound, he just was knocked out from the trip,” Sacco said. “And we just look forward to bringing him back next year. There's a bunch of good races that he ran in this year that he will point for next year. And he's a neat horse. He's a very lightly raced horse, he only has 23 races in his career even though he's turning six years old.”

Sacco said Mind Control is “absolutely professional. He's easy on himself. He’s a very smart horse. … He loves to train and really enjoys what he's doing.”

The decision to switch Mind Control to Pletcher ahead of the John A. Nerud Stakes (G2) was not well-received by Gregg Sacco, according to media reports.

Rick Sacco said the move was made because “we wanted to keep the horse in New York and race there in New York, meaning just drop his webbing and walk him over to the races. Todd Pletcher trains a bunch of Red Oak horses for us for years. And it was just something that came to be, that that would be the best place for him to be is in New York with most of all of his races in the spring and in the summer in New York.”

And he explained that the move fit in with Red Oak’s overall approach.

“My brother trains a bunch of horses for Red Oak. Two years ago, I took Bal Harbour, who had finished second in the Woodward, which is a Grade 1, and sent them over to Gregg, because all of his races were at Monmouth Park, the Salvator Mile, the Iselin, the Monmouth Cup. And that's horse racing. We're trying to place our horses where they belong the best.

“Like for instance, right now, we just flew It Can Be Done to California for the Hollywood Derby. My brother trains that horse. We have great belief in Gregg's program. But sometimes, you have to move horses around to where they're best suited.

“We have a couple of horses with Saffie Joseph at Gulfstream that are Florida-breds. There's a horse that Saffie's training that my brother trained, but that horse is better-suited for year-round Florida-bred racing. So I think that, with the purses that are so good in so many different jurisdictions, whether it's in Kentucky – we have a couple of horses with Brad Cox that are Kentucky-breds – we want to be part of that circuit. We have Florida-breds with Saffie Joseph, and Todd is our guy in New York, he trains a bunch of horses for us. Mind Control was more, we wanted to be in New York spring and summer without having to ship him And we have a relationship with Todd.”