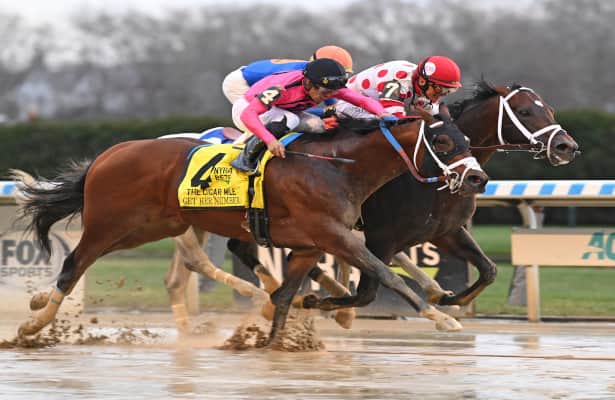 Multiple Grade 1-winner Mind Control will retire on top of his game after securing a trademark gutsy score in Saturday’s Grade 1, $750,000 Cigar Mile Handicap at Aqueduct.

Trained by Hall of Famer Todd Pletcher and piloted by fellow Hall of Famer John Velazquez, the 6-year-old son of 2012 Cigar Mile-winner Stay Thirsty entered his swan song a fresh horse out of a victory via disqualification on Sept. 24 in the Parx Dirt Mile.

Mind Control, who is owned by breeder Red Oak Stable and Madaket Stables, crossed the wire a winner by less than one length on Saturday for the seventh time in his 29-race career, including for his former conditioner Gregg Sacco with a three-quarter length score in the 2018 Hopeful (G1) at Saratoga and a nose win in the H. Allen Jerkens Memorial (G1) one year later at the same track.

Pletcher, who took over training duties of the talented bay last July, said he was in awe of the gritty effort from Mind Control.

“If you like horse racing, you’ve got to love this horse. He’s cool,” Pletcher said. “He’s done it consistently year after year at multiple distances. He’s a great horse to be able to train. He’s remarkably consistent and shows up every morning.

“When he broke well, I was happy and there was a moment in the first sixteenth of a mile where I wasn’t so sure if he was liking the surface, which a couple of times in the past he hadn’t cared for,” Pletcher added. “But then once he got into a good rhythm down the backside, I was confident. He’s the type of horse that if you get into a battle with him, he’s going to fight.”

MIND CONTROL finishes his career with a win in the Grade 1 Cigar Mile pres. by @NYRABets with @ljlmvel aboard for @PletcherRacing! #TheBigA pic.twitter.com/OxCiPM1Wwx

Mind Control broke well from the outermost post 6 and tracked in second position as longshot Outlier led through splits of 23.26 seconds and 46.55 over the sloppy and sealed main track. The Luis Saez-piloted Grade 1-winner Get Her Number and fellow Grade 1-winner Zandon, the 3-5 mutuel favorite under Joel Rosario, advanced with purpose into the turn as Outlier gave way to leave room on the rail for another onrushing Grade 1-winner in White Abarrio.

Get Her Number had momentum as the field straightened away, but Mind Control would not relent as White Abarrio joined the fray with an inside rush. However, a determined Mind Control, as he has done so many times before, found the wire first and put his head down to stop the clock in a final time of 1:35.53. Get Her Number completed the exacta by a half-length over White Abarrio with the wide-rallying Zandon in fourth. Outlier and Double Crown completed the order of finish. O Besos was scratched.

In victory, Mind Control added to a ledger that includes additional graded scores at the Big A in the 2019 Bay Shore (G3), 2020 Toboggan (G3) and 2020 Tom Fool Handicap (G3) along with victories in the John A. Nerud (G2) last year at Belmont Park and the Salvator Mile (G3) in June at Monmouth Park.

Pletcher, who has lost a few stable stars to retirement this year, said he will miss leading Mind Control over, although his roster was bolstered by a winning effort from Julia Shining – a 2-year-old full-sister to multiple Grade 1-winner Malathaat – earlier on the card in the Demoiselle (G2).

“It’s what you hope to achieve, but when you lose Life Is Good, Malathaat, and Mind Control, it’s hard to replace those types,” Pletcher said.

Velazquez, who won this event previously with Left Bank and Tonalist (2015), said he was concerned about the off going after guiding Mind Control through off-the-board efforts on sloppy tracks in 2020 in the Carter Handicap (G1) at Belmont and the Forego (G1) at the Spa.

“The first sixteenth of a mile, he broke good and I was like, ‘Oh, please. Don’t do this to me.’ He seemed like he was going to go, but he came out of the bridle,” Velazquez said. “So, I passed the chute and kind of put him into the bridle and he got comfortable. I felt much better the way he was going toward the turn and when the other horse (Get Her Number) came to him, he got competitive. So then I felt like he was going to fight.”

Velazquez said when Get Her Number was unable overtake him with immediate effect, he knew his charge was in with a shot.

Saez, a two-time Cigar Mile victor, said he felt like a winner aboard Get Her Number at the head of the lane.

“I thought we were going to beat Mind Control easy, but he came back. He’s a tough horse to get by. He always fights,” Saez said.

Velazquez, who has guided Mind Control to 10 of his 12 career wins, said he will miss his retiring friend.

“I’ve been around this horse for five years and he’s been a really decent horse and shows up to the big dances with really tough horses – and he does it all the time,” Velazquez said. “I’m a little sad to see him go because he’s one of the horses that kind of keeps me in the game and kind of looking forward to these kinds of races. He’s gone, so I’ll have to start looking for something else to keep me in the game.”