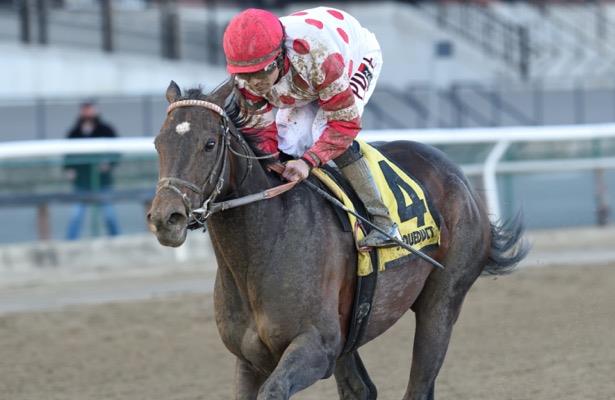 The seven-furlong Carter, which offers a berth in the Breeders' Cup Sprint, drew a field of 11 and will kick off the first of five consecutive Saturdays including Grade 1 races at Belmont's spring/summer meet.

Trained by Gregg Sacco, the 4-year-old Mind Control's NYRA ledger includes a pair of Grade 1 wins at Saratoga Race Course, beginning with the Hopeful as a juvenile and the H. Allen Jerkens in August to close out his sophomore season.

The Stay Thirsty colt opened his 2020 campaign with a narrow nose win over Nicodemus in the Toboggan (G3) at Aqueduct Racetrack. A prominent Mind Control had a head in front at the stretch call of the Toboggan and appeared certain to be collared by Nicodemus or Sunny Ridge, who finished a nose back in third in a three-way photo.

Sacco said Mind Control's heart is just as important as his natural talent.

"That heart is something he has. All the top racehorses have that extra gear and desire to stay in front," said Sacco. "It's something that doesn't come from training. Horses are talented and we work to get the best out of our horses, but that heart comes from within. He's just a super talented colt with a desire to get there first.

"I thought he was beat that day [in the Toboggan]," continued Sacco. "I thought maybe I didn't have him tight enough, but he surged to the wire and galloped out strong. He's a genuine special horse."

Last out, Mind Control again showed his determination when overcoming a stumbled start to rally to a convincing 1 1/4-length score in the Tom Fool Handicap (G3) on March 7 at Aqueduct.

Sacco said Mind Control has trained impressively at Belmont Park, including a solid five-furlong breeze in 1:01.25 on the Belmont main track on Saturday.

"Mind Control is doing well and training lights out," said Sacco. "He's had about nine works since the Tom Fool. The last work was super. He has two races under his belt this year and he's a very fit animal. He worked Saturday in 1:01.1 and galloped out in 1:12.4, which was exactly what we wanted. We wanted him to finish strong and he did."

Sacco tipped his cap to NYRA's race office for assembling a quality field for the first Grade 1 of the Belmont spring meet.

"Performer is an unbelievable horse for Shug," said Sacco. "He's run a string of tremendous races back-to-back and won four in a row. Network Effect and Vekoma both had great comeback races. You could probably make a case for every horse in this race.

"We expected a tough race in the Carter, and the race office has assembled a top-notch field from top to bottom," added Sacco. "I hope everyone gets a good trip and may the best horse win."

Performer, a 4-year-old Speightstown chestnut bred by Phipps Stable, finished third in a troubled debut in November 2018, but hasn't put a step wrong since with four consecutive wins topped by a last-out score in the 1 1/8-mile Discovery (G3) on Nov. 30 at Aqueduct.

The talented colt has won at distances from six to nine furlongs, and Hall of Fame trainer Shug McGaughey said the versatile Performer is on the improve after wintering at Payson Park in Florida.

"He had a very good winter. All of his works were good at Payson and all have been good here," said McGaughey. "He schooled in the paddock today and was very good. We're looking forward to getting him started. He's gotten bigger and stronger. If we can get a good, solid effort out of him and move ahead, we'll be happy. He had four solid races last year and I think it got him to this year in good position."

A winner at first asking when sprinting seven furlongs on Aug. 11, 2018, at Saratoga, Network Effect completed the exacta in both the Nashua (G3) and Remsen(G2) to complete his juvenile campaign.

Network Effect made just two starts as a sophomore, winning an allowance event in November ahead of an off-the-board effort in the Grade 1 Cigar Mile. Following a freshening, Network Effect has raced twice at Gulfstream Park when second coming off the bench in an optional-claiming mile before a patient two-length score in the seven-furlong Big Drama on May 2.

"I hope he gets the same trip as last time," said Brown. "It's a big step up for him, but he seems to be an improving horse, so we're giving it a shot."

R.A. Hill Stable and Gatsas Stables' Vekoma, a 4-year-old son of Candy Ride, made the grade in the one-mile Nashua in November 2018 at Aqueduct. The talented chestnut captured the nine-furlong Blue Grass(G2) in April 2019 at Keeneland en route to an off-the-board effort in the Kentucky Derby.

Trained by George Weaver, Vekoma earned a career-best 102 Beyer Speed Figure when romping to a 3 3/4-length score in his seasonal debut last out in the seven-furlong Sir Shackleton on March 28 at Gulfstream Park.

Hall of Famer Javier Castellano has the call aboard Vekoma from the outside post.

Winchell Thoroughbreds and Stonestreet Stables' Nitrous, a 4-year-old Tapit colt, captured the Bachelor in April 2019 at Oaklawn Park. The late-running grey, bred in Kentucky by Winchell Thoroughbreds, rallied to be fifth in the H. Allen Jerkens (G1) last summer and could benefit from a strong pace in the Runhappy Carter Handicap.

Slated as Race 9 on Saturday's 11-race card, which offers a first post of 1:15 p.m. ET, the Carter Handicap will feature on America's Day at the Races, produced by NYRA in partnership with Fox Sports, airing live on FS1 and MSG+.