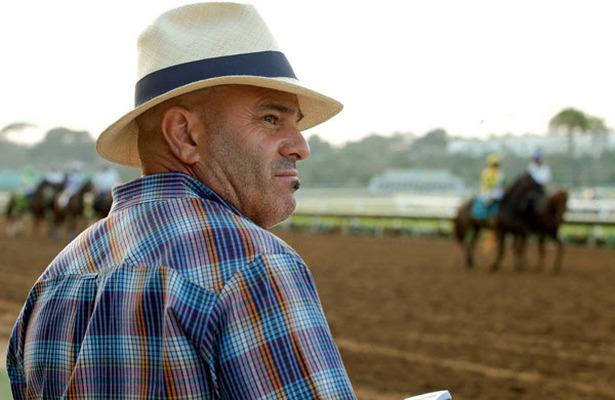 If there was a trophy for the Del Mar summer training title, Peter Miller’s name could already be etched upon it. In fact, hyper engravers could have done so a week or two ago.

Miller, a resident of nearby Encinitas, entered the closing day program with 27 wins from 110 starters, an eight-win advantage over Phil D’Amato. Bob Baffert has saddled 14 winners and Doug O’Neill 13.

It’s the fourth summer title at Del Mar, which matches the number of fall Bing Crosby Meeting championships he has accomplished since that session was inaugurated in 2014.

“I’m thrilled and feel blessed to have such a great team to work with and this is a reflection of them all as well,” Miller said this morning. “From the hot walkers to the assistant trainers, they all give a 100 percent effort every day. And I have owners that allow me to run their horses where I think they should be and where they have a chance to win.”

When asked before the meeting to assess his title chances, Miller was not wildly enthusiastic. “I’ve got half as many horses as (Richard) Baltas, (Bob) Baffert or Doug (O’Neill) and for me to win everything has to go close to perfect,” Miller said on the eve of the July 10 opener.

In retrospect, Miller said the projection may have been conservative.

“I tend to be a sandbagger,” Miller said with a laugh. “I set my expectations a little low and hope to exceed them. It’s really a numbers game and if you can win a good enough percentage things (like titles) happen for you.”

The 25 percent win rate, from the second-highest number of starters at the meeting going into the last day, was sufficient to win the title by a comfortable margin.

“In my mind, 20 percent is a good win percentage,” Miller said. “Anything over that exceeds my expectations. Our horses ran well throughout the meeting. We didn’t really have any bad slumps and that makes a big difference.

“I’d just like to thank the Del Mar Thoroughbred Club for putting on a pretty darn good show under the circumstances.”