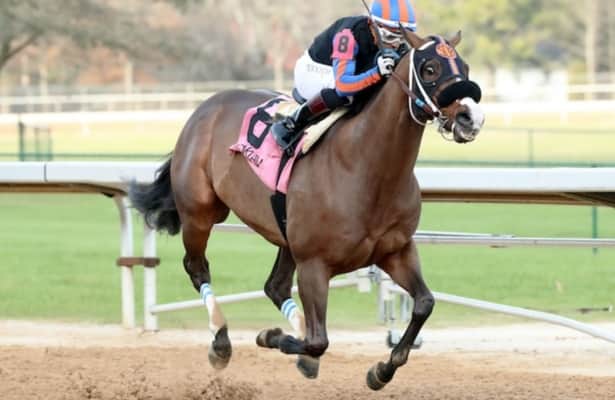 Following his powerful victory in the $150,000 Fifth Season Stakes for older horses Jan. 14 at Oaklawn, Ginobili returned Tuesday to his Southern California base to begin preparing for his yet-to-be determined next start, trainer Peter Miller said Thursday afternoon.

Miller said Ginobili will be considered for the $600,000 Razorback Handicap (G3) for older horses at 1 1/16 miles Feb. 18 at Oaklawn and races this winter and early spring in the Middle East (Saudi Arabia and the United Arab Emirates). The Saudi Arabia race would be a sprint Miller said, with the UAE race either a sprint or at a mile.

“We’re deciding between the Razorback and the Middle East,” Miller said.

Ginobili received a preliminary Beyer Speed Figure of 96 for his four-length Fifth Season victory under Ricardo Santana Jr. Ginobili ($5.80) covered the mile over a fast track in 1:37.35 as the 9-5 favorite in the 10-horse field.

Following the Fifth Season, Santana, an eight-time Oaklawn riding champion, said he believed Ginobili was only “75 percent” fit for the race. The 6-year-old Munnings gelding was making just his second start in a little more than year.

“That’s a scary proposition,” Miller said. “I hope he’s right. We were tickled over how he ran and how he came back. Certainly, the Razorback makes a lot of sense, timing wise. I imagine there will be one or two new shooters, but I would imagine it’s roughly the same bunch.”

In his first start for Miller, Ginobili finished second, beaten a head by stablemate Get Her Number, in a Nov. 20 allowance sprint at Del Mar. It marked Ginobili’s first race in almost a year following a physical setback, Miller said. Ginobili had concluded his 2021 campaign with a sixth-place finish in the $750,000 Cigar Mile Handicap (G1) in December at Aqueduct.

The Fifth Season was redemption for the horse’s ownership group, Slam Dunk Racing, after Ginobili ran poorly in two allowance races (finishing fifth and seventh) late in the 2020 Oaklawn meeting. Ginobili, as the 4-5 favorite, was beaten 9 1/2 lengths in the first start, a 6-furlong race that marked his first outside California. Santa Anita, where Ginobili had made his previous two starts, both stakes, was shuttered in the spring of 2020 because of the coronavirus.

“We think he’s a different horse now,” Nick Cosato, Slam Dunk’s managing partner, said following the Fifth Season. “He’s healthy. He had some time off. I think he got a little bit sour when he was here and it wasn’t the track itself. It was just the way he was doing. Now, he’s in good form, and I mean we saw the real Ginobili today.”

The Fifth Season was Ginobili’s fourth victory from 17 starts and bumped his career earnings to $561,050. It was his second stakes victory. Ginobili recorded his biggest career victory to date in the $200,000 Pat O’Brien Stakes (G2) at 7 furlongs in August 2021 at Del Mar. He also ran second in the $1 million Breeders’ Cup Dirt Mile (G1) in November 2021 at Del Mar. Ginobili was purchased for just $35,000 at the 2018 Keeneland September yearling sale.