Mill Ridge gets sentimental, 42-1 win from half to Analyze It 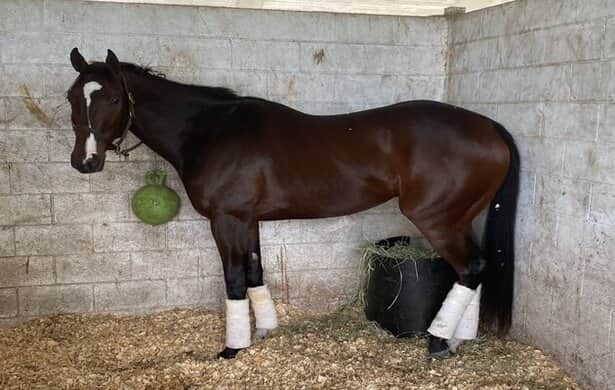 Moms Moon, a half-brother to Grade 1 star Analyze It, paid $87.60 when debuting on the turf Saturday at Gulfstream Park. The result was as lucrative for winning horseplayers as it was heartwarming for the connections.

Mill Ridge Farm’s homebred Kitten’s Joy gelding lit up the toteboard as the second-highest priced winner last week across all tracks in the United States. On top of those juicy 42-1 odds, Moms Moon won on the late Alice Chandler’s birthday and was named after the type of moon present when she passed.

“(We) named (Moms Moon) after my mother Alice Chandler who often said her favorite moon was the crescent moon, or as she said, “fingernail moon,” Mill Ridge president Headley Bell said. “When she died on April 6, 2021, (we) noted the fingernail moon, and we said we need to name a horse after that, thus Moms Moon.”

Moms Moon made his debut Dec. 4 at Turfway Park, picking up a few horses very late to finish ninth of 12 at 16-1. The comment “always outrun” likely did not inspire confidence in bettors second-time out, hence the big price, but Bell knew there was talent there.

“To add to this beautiful story when (trainer) Rusty Arnold told me there was a race for (Moms Moon on) Jan. 15, I said, ‘Well, that’s fitting, as it is mom’s birthday,’” Bell said. “Rusty always liked him, but his first start at Turfway, he was in the ‘10’ hole and broke out at the start and then got a lot of kickback. Rusty knew he was better than that.”

Moms Moon went right to the lead in his turf debut, overcoming the outside post early and fighting for a neck victory late under what Bell called a “perfect ride” from jockey Emisael Jaramillo.

See the race replay below.