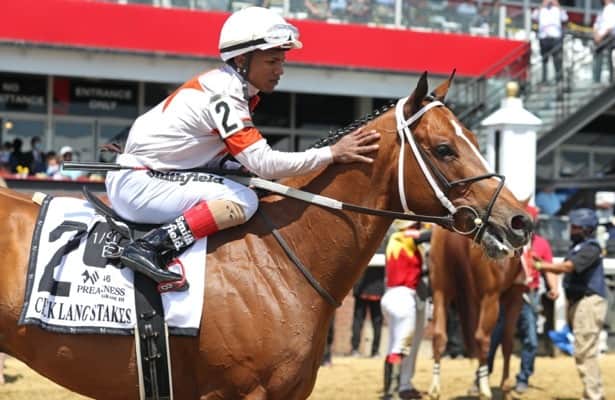 The 46th running of the six-furlong Chick Lang for 3-year-olds was the first of six graded-stakes among 10 stakes worth $2.25 million in purses on a 14-race program headlined by the 146th Preakness Stakes.

Ridden by Ricardo Santana Jr. for Hall of Fame trainer Steve Asmussen, Mighty Mischief ($5.60) completed the distance in 1:09.74 over a fast main track. Santana and Asmussen also teamed up to win the 2015 Chick Lang with Holy Boss.

Mighty Mischief gave Asmussen his fifth victory in the Chick Lang, including Lantana Mob (2008), Mitole (2018) – named champion male sprinter of 2019 – and Yaupon, who tied a stakes record with his victory in 1:09.10 last year. The Heiligbrodts also campaigned Mitole.

Maryland-bred Jaxon Traveler, previously unbeaten in the first three starts in his home state, including a 10-length debut triumph last September at Pimlico, and his first stakes score in the Maryland Juvenile Futurity in December, broke running from Post 4 but was quickly passed for the lead by Mighty Mischief.

A bay son of Into Mischief, less than a length shy of being undefeated through four starts, Mighty Mischief ran through splits of 26.34 and 45.97 seconds with Hutcheson winner Willy Boi in pursuit as Jaxon Traveler dropped back to fourth. Jaxon Traveler was swung three-wide by jockey Irad Ortiz Jr. for a clear run at the leader but was unable to gain ground as Mighty Mischief powered to the wire.

“The only thing that could have been better is a dead heat,” Asmussen said. “I think they’re both very quality horses. The race might have been a little quick back for Jaxon Traveler. He didn’t have as much speed as he normally does, and the race got away from him a little bit from the half-mile to the three-eighths.”

Jaxon Traveler was a clear second, 2½ lengths ahead of Hemp, who closed late for third. It was 3¼ lengths back to Willy Boi in fourth.

Unraced at 2, Mighty Mischief came up three-quarters of a length short of Aloha West in his Feb. 7 unveiling at Oaklawn Park. The Chick Lang was his third consecutive gate-to-wire victory, after breaking his maiden March 19 and beating winners at first asking April 10 by 7 ¾ combined lengths, also at Oaklawn. All four of his races have come at six furlongs.

Run as the Hirsch Jacobs Stakes from its inception in 1975 to 2009, the Chick Lang was renamed in honor of the racing industry legend widely known as ‘Mr. Preakness,’ who passed away in 2010 at age 83.