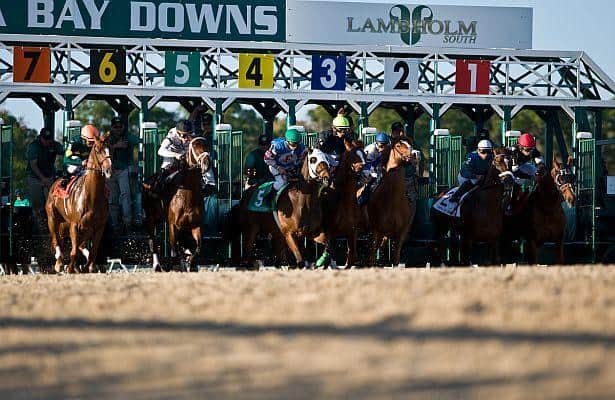 Any nerves trainer Tim Ice felt before the $100,000 Pasco Stakes were dispelled every step of the way by Mighty Brown, who launched a powerful move approaching the 3/8-mile pole and drew away from determined pace setter Cool Cowboy through the stretch for a three-and-a-quarter-length victory.

Mighty Brown – a Kentucky-bred son of 2008 Kentucky Derby winner Big Brown, out of Mighty Martha, by Chester House – was ridden exquisitely by Dean Butler, the pilot when Mighty Brown broke his maiden at Tampa Bay Downs going six furlongs on Dec. 7. The winner’s time on a fast track was 1:24.17. Now 2-for-9 lifetime with four seconds, including two in stakes company while a maiden, Mighty Brown paid $10.40 to win as third betting choice.

“We can hope and dream all we want, but until they run the race you don’t know,” said Ice, the trainer of 2009 Belmont Stakes winner Summer Bird. “I’ve thought he was a very talented colt from Day 1, and I think cutting him back in distance has helped him a lot. I thought he would be a perfect seven-furlong horse and it worked out well today.”

Butler was surprised by the alert start by Mighty Brown, who had worked five furlongs in 1:01.40 here on Dec. 28. The winner lay comfortably off the early fractions of Cool Cowboy and long shot Three Quarter Roy before Butler asked for his best effort.

“He broke fast and if anything, he was more aggressive than I wanted,” Butler said. “I was able to get him to relax getting to the half, and we had a bead on the leader by then. I asked for run getting into the stretch and I was more worried about something coming up on the inside than I was about getting past the leader.

“He finished up really well, like a very good horse.”

Cool Cowboy may have started a step slow, but this was Mighty Brown’s day. “I loved the outside (No. 8) post, and he broke so sharply he was up there a little closer than where I thought he’d be,” Ice said. “He showed today he can be up there and still finish strong, and I loved how he finished.

“Dale Bennett’s horse (Cool Cowboy) ran a heck of a race. I thought he was the horse to beat going in, but this was a pretty contentious group of horses.”

Ice said he is leaning against sending Mighty Brown back in the Grade III, $250,000 Sam F. Davis Stakes on Feb. 1 at a mile-and-a-sixteenth. “Right now, I think I’ll just want to keep him going one turn,” Ice said. “He’s run well going a mile, but I don’t know whether I’m ready to push him that far (the Davis distance) yet.

“We’re just going to sit back after this race and wait a little bit to see where we go next,” Ice added.

Meanwhile, Nesso’s owner Dennis Amaty (Amaty Racing Stables) was exultant after the Florida-bred daughter of Roman Ruler-Devotedness, by Anet, staved off Ice for the Lady by a length in the Gasparilla under Abdiel Jaen. Runway Giant finished third. My Sweet Dove, the Sandpiper Stakes winner, ran evenly to finish fifth and favorite Enquete faded to ninth.

Nesso, who was twice stakes-placed in California and competed in the Breeders’ Cup Juvenile Fillies Turf at Santa Anita, improved to 2-for-6 with two seconds for Amaty Racing Stables and trainer Herman Wilensky. She paid $10 to win as third betting choice.

Wilensky assistant Sandino Hernandez handled the saddling chores. The Gasparilla was only Nesso’s second start on dirt. Her winning time was 1:24.93.

Amaty, who has owned horses for 12 years, was doubly thrilled since he tried to sell Nesso at Del Mar as a 2-year-old. He had originally claimed her for $25,000 out of her maiden victory at Calder last June.

“Thank God no one wanted to pay what I wanted for her,” said Amaty, a resident of Wellington, Fla. “We left her in California for a while and (trainer) Vann Belvoir did a great job with her, but after the Breeders’ Cup (and a fourth-place finish in the Grade III Miesque at Betfair Hollywood Park), we thought it was time to bring her home and have a little fun with her. We like the conditions and the backside at Tampa Bay Downs, and I am in the sport to have fun.

“She deserves all the credit,” added Amaty, who said he will sit down with Wilensky and Hernandez before determining her next start. “She is a little horse with a big heart and will fight to the end.”

Jaen, who rode 5-year-old mare Beauties Honor to victory in the second race for trainer Greg Griffith, gave Nesso a textbook ride, keeping her slightly off the pace set by long shot House Money, and appeared to have plenty left approaching the finish.

“I knew there were some fast fillies in here so I wanted to stay close to the lead, but I also wanted to wait to make my run,” Jaen said. “I knew there would be a late run from someone, so I kept asking for run and she had something left.”