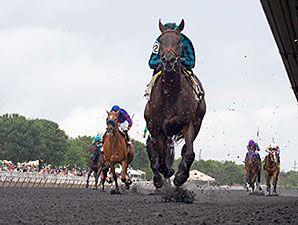 The son of Midnight Lute trained by Mike Tomlinson was last seen finishing second in the Presque Isle Downs Mile earlier this month behind Florida Won. Prior to that, he triumphed in the Hanshin Cup (GIII) at Arlington Park. Those were the 5-year-old’s only starts over synthetic surfaces.

“That was an experiment starting off and it turned out to be a successful one,” Tomlinson said. “He seems to love the synthetic track.

“He wasn’t quite right last year when we claimed him,” Tomlinson said. “He had been running credible races but he’s a much better horse now than he was back then. That was shortly after we had claimed him. He some issues that we worked on when we claimed him. He’s just blossomed and doing really well now. The horse had run some big numbers in Florida and ran some races against good horses. I’m not going to say that we improved him, but I do think we got him to the level he’s going to perform well on whatever surface that we put him on.”

Midnight Cello is cross-entered in the $50,000 Teleprompter at Arlington Park but will scratch from there to compete in the Ack Ack. Florent Geroux, the pilot in his two most recent outings, will be aboard for Saturday’s race.
The Ack Ack field from the rail out (with jockey and morning line odds): Den’s Legacy (Calvin Borel, 10-1), Agent Di Nozzo (Joe Rocco Jr., 5-1), Midnight Cello (Florent Geroux, 3-1), Hat of Jacks (Francisco Torres, 30-1), Tapiture(Ricardo Santana Jr., 7-5), Viva Majorca (Julien Leparoux, 3-1) and Roman Unbridled (Jon Court, 30-1).
TEPIN, THE PIZZA MAN, WORK ALL WEEK PUT IN FINAL BREEZES BEFORE KEENELAND STAKES
Midwest Thoroughbreds’ The Pizza Man and champion sprinter Work All Week put in their final breezes Friday morning in preparation for next weekend’s stakes engagements on opening weekend at Keeneland.
The Pizza Man and Work All Week breezed four furlongs separately in :49.80 and :47.40, respectively. The former will go in the $1 million Shadwell Turf Mile (GI) on Oct. 3, while the latter will run in the $400,000 Phoenix (GIII) on Oct. 2. Regular jockey Florent Geroux was aboard both horses for their breezes.

“They both worked very well so we’re real pleased with it,” Geroux said. “It’s nice to ride better stuff. Good horses make you look that much better.”

Richard Papiese, owner of Midwest Thoroughbreds, was at Churchill Downs on Friday morning to watch both of his horses work and liked what he saw.

“They’re going into their races well – they’re ready,” Papiese said. “There will be some good competition, but they’re definitely ready. Our horses are well taken care of as one can see and they tell us when they’re ready. I hope this continues on. They’ve given no indication as to why it won’t.”

Papiese discussed the success that both horses have achieved and how he had high hopes for both of them from the beginning.

“I thought they would both be high level horses but I didn’t know what their ceiling would be,” Papiese said. “They both answer the call each time. Work All Week got plenty of time off after the Breeders’ Cup and they got a bunch of time last year. The whole idea is to have a good horse this time of the year when it really matters. I know it seems unconventional, but we’re just thinking about the horses. Numbers don’t lie.”

Also on the Churchill Downs work tab Friday was Robert E. Masterson’s Tepin, who breezed a half-mile in :49.40 with Julien Leparoux up. Norman Casse, assistant to his father Mark, says the daughter of Bernstein remains on track for the $400,000 First Lady (GI) on Oct. 3 at Keeneland. Should she win said race, Casse would likely start her in the $2 million Breeders’ Cup Mile (GI) against males.

“We would seriously consider running in the Breeders’ Cup Mile if she wins,” Casse said. “We don’t think she wants to go that far so the Filly & Mare Turf is out. That is a race that can be won by a filly so it’s not like it’s out of the realm of possibility. That’s kind of the goal. We’ll see how she runs this weekend before we make any big decisions.”

Coming off of two second-place efforts on grass in the 1 1/8-mile Diana (GI) and 1 1/16-mile Ballston Spa (GII) at Saratoga, Casse is looking forward to shortening back up to one mile.

“Speed doesn’t seem to do well [at Saratoga] and then you couple that with the fact that she really is a genuine miler, so we’re running her a mile-and-an-eighth, mile-and-a-sixteenth. It was kind of a perfect storm for her to get beat. It’s great to be going back to what she does best.”

LUKAS ‘DOING BETTER’ ACCORDING TO ASSISTANT TRAINER
Hall of Fame trainer D. Wayne Lukas continues to show improvement after being hospitalized on Saturday morning due to a low heart rate, according to assistant trainer Sebastian “Bas” Nicholl.

“He’s doing well right now, hopefully they release him soon,” Nicholls said. “I spoke to him a few times this week and he seems to be doing better. He’d like to try and drive back here on Saturday. They’re going to try and leave there on Saturday morning, that’s what he hopes for but that’s not guaranteed.

Nicholl believes that “The Coach” will be “ready for some action” upon returning to Louisville.

“We’ll see how he feels,” Nicholls said. “I’m sure he’s going to want to take it easy for a few days but I can expect he’ll be back soon enough.”

“Inside Churchill Downs,” the horse racing radio show co-hosted by Churchill Downs Racetrack’s John Asher and Darren Rogers, will air Saturday from 11 a.m. to noon on 93.9 The Ville.