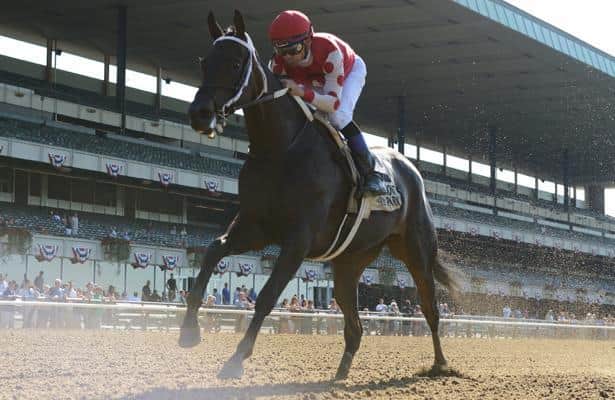 The daughter of Midnight Lute, transferred to Steve Asmussen’s barn following a third-place effort in the Kentucky Oaks, rolled under a Mike Smith hand ride to win by eight lengths in her first race on the East Coast.

"Today she got to show who she really was," Smith said. "It was so unfortunate in the Oaks -- I got wiped out the first jump, lost position, and it was fighting a losing battle the whole time.

"She still ran third, so I knew today if she fired her race, she'd be tough."

Midnight Bisou with #mikesmith run away down the stretch to take the Mother Goose (G2) Stakes!#BelmontPark pic.twitter.com/HffeNREjFC

Having broken alertly, Midnight Bisou followed unbeaten Road to Victory through an opening half mile in 46.87 seconds. Smith shifted his filly outside, and they glided past the competition to score at odds of 2-5.

"She's getting better, this mare," Smith said. "She's going to get better through the year as well. I'm really looking forward to late summer going into November with her."

That made four victories in her last five starts, with Bill Spawr the previous trainer. She’s with Asmussen now to focus on top races for 3-year-olds away from the West Coast.

Along with the barn change, Midnight Bisou added to her ownership, with Madaket Stables joining Bloom Racing Stable and Allen Racing beginning with this race.

"She came to us in great condition from Bill Spawr," said Scott Blasi, assistant to Asmussen. "She's been a pleasure to be around. Very easy to train, does more when you need her to and does things effortlessly like the good ones do.

"We'll see how she comes out of this tomorrow and she'll move up to Saratoga this week with our barn. We're starting to move horses in there right now and we're excited about this summer and the fall ahead with this filly. I think she's capable of major things."

Well back of Midnight Bisou, My Miss Lilly was within a length of Road to Victory. Indy Union ran fourth to complete the order.