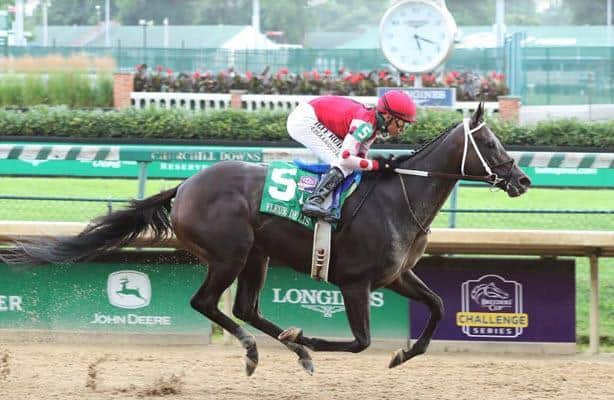 Champion Midnight Bisou returned with a flourish on Saturday when making short work of the field in the $200,000 Fleur de Lis Stakes (G2) at Churchill Downs on Saturday.

Making her first start since running second to Maximum Security in the $20 million Saudi Cup in February, Midnight Bisou and Mike Smith were well back off an opening quarter in :23.18 set by a loose-on-the-lead Serengeti Empress, last year's Kentucky Oaks (G1) winner. Serengeti Empress continued to motor down the backstretch through a sharp half mile in :46.15 and held the lead into the middle of the second turn while being stalked by longshot Motion Emotion.

However, at the three-eighths pole, Midnight Bisou had started to roll. Last year's champion older female uncorked a breathtaking move on the second turn to inhale both Serengeti Empress and  Motion Emotion. Midnight Bisou then kicked clear of those rivals at the top of the stretch and drew off before finally being geared down by Smith in the final 200 yards.

Trained by Steve Asmussen, Midnight Bisou completed 1 1/8 miles on a fast track in 1:48.99 and paid $3.00. Motion Emotion finished 8 1/2-lengths back in second and was followed by Another Broad and Serengeti Empress.

“She’s just an amazing mare," Smith said. "I actually had took the lead a little before I wanted to. We were planning on laying a little bit closer, but the way Serengeti Empress was winging it on the front end we were a little further back. She’s just incredibly special.”

“She’s a really special mare--to come back, in that sort of style, is just tremendous," Asmussen said. "She has such an amazing talent and such a great relationship with Mike. She beat a wonderful-looking group of mares. We have nothing but respect towards them.”

With the win, Midnight Bisou earns an all-expenses paid berth to the Breeders' Cup Distaff at Keeneland Race Course later this year. In 2018 as a 3-year-old, Midnight Bisou was third in the Distaff at Churchill Downs, only beaten a length by eventual champion Monomoy Girl. Last year, she kicked on late to be second to Blue Prize over a track she reportedly didn't care for at Santa Anita Park.

Owned by Bloom Racing, Madaket Stables and Allen Racing, Midnight Bisou improved her record of 21-13-5-3. The daughter of Midnight Lute officially had $7.25 million in earnings. However, that does not include the second-place share of the Saudi Cup, as that purse is being held pending an investigation into winner Maximum Security.

Midnight Bisou was purchased for $80,000 by Bloom Racing's Jeff Bloom, agent, at the OBS April 2-year-olds in training sale.