Code of Honor, a $2.4-million earner and winner of last year's Grade 1 Travers Stakes and Grade 1 Jockey Club Gold Cup, continued to build on his graded stakes winning form in his 2020 bow when scoring a victory in the Grade 3 Westchester Stakes on June 6.

Owned by Mike Pegram, Karl Watson and Paul Weitman, McKinzie was a troubled second beaten three-quarters of a length to eventual champion Mitole in last year's running of the Met Mile, where he lacked racing room down the stretch, found a hole to the inside of runners and made a late move to complete the exacta. (via NTRA) 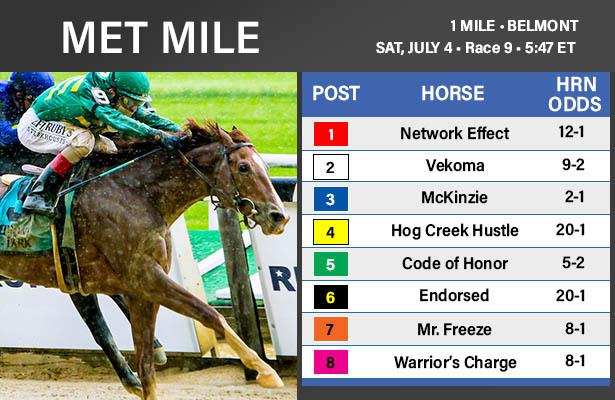 The TimeFormUS Pace Projector calls for an honest early pace with No. 7 Mr Freeze and No. 8 Warrior's Charge contending to be the early pacesetter. The second tier of contenders early on should be No. 2 Vekoma and No. 4 Hog Creek Hustle, with No. 5 Code of Honor seeing them all early.

Find everything you need for the 2020 Met Mile below, including free past performances, expert picks and undercard stakes previews.

Horse Racing Nation's staff and regular contributors give their 2020 Met Mile predictions and longshots. There is no consensus top-choice in this edition of the wide-open Metropolitan, and our experts provide their personal analysis of the race, explaining why they think they have the winner and who they think will hit the board. See which longshots they prefer.

Handicapper Reinier Macatangay delves into the final four stakes races on the Belmont Park Met Mile card as well as the Grade 3 Delaware Oaks. He believes the pace setup will help Sir Winston in the Suburban, and has an upset pick for the Met Mile. Read his analysis of five of the weekend's biggest stakes races.

An eight-horse field boasting a combined 20 graded stakes victories, led by Grade 1-winning multimillionaires Code of Honor and McKinzie, make up a talented group assembled for Saturday's 127th running of the Grade 1, $500,000 Runhappy Met Mile on July 4 at Belmont Park.

America's Day at the Races, produced by NYRA in partnership with FOX Sports, and airing live on Fox Sports and MSG+ will offer live coverage of Belmont Park stakes action on Saturday from 1 - 5 p.m. and from 6 - 7 p.m. on FS1. Free Equibase-provided past performances are available for races that are part of the America's Day at the Races broadcast and can be accessed at https://www.nyra.com/belmont/racing/tv-schedule.

Following a winter freshening after a distant seventh in the Grade 1 Breeders' Cup Classic in November, the W.S. Farish homebred continued to build on his graded stakes winning form in his 2020 bow when scoring a third overall victory over Big Sandy in the Grade 3 Westchester on June 6.

McGaughey said Code of Honor has matured physically and mentally as a 4-year-old.

"He just grew up physically in his body and his mind," said McGaughey. "He's gotten more aggressive and he's caught onto what it's all about now. He was still figuring things out last year, especially earlier in the year. Everything he's done this year has been good.

"He acts like he's ready to run," continued McGaughey, who teamed up with Farish to win the Met Mile with eventual Champion Older Horse Honor Code in 2015. "He's had plenty of time off over the winter and it seems to have done him some good, so we'll just see what he does."

Hall of Fame trainer Bob Baffert will be seeking redemption in the Met Mile when he sends four-time Grade 1 winner McKinzie to Big Sandy.

Owned by Mike Pegram, Karl Watson and Paul Weitman, the 5-year-old son of Street Sense was a troubled second beaten three-quarters of a length to Mitole in last year's running, where he lacked racing room down the stretch, found a hole to the inside of runners and made a late move to complete the exacta.

"I think any time you win a Grade 1 on the east coast it's pretty important, especially at Belmont and Saratoga. It's like hitting a home run in Yankee Stadium, it means something," Baffert said.

Bred in Kentucky by Summer Wind Farm, McKinzie arrives at the Met Mile off a victory at his home base in the Grade 2 Triple Bend on June 7 at Santa Anita and has been training forwardly for Baffert at his southern California base. His most recent two works were a five-furlong drill in 59.60 seconds on June 22 and a six-furlong move in 1:12.20 on June 28.

"His comeback race was just perfect," Baffert said of the Triple Bend. "We just need to draw well and find some racing luck and good weather. If he brings his A game that's what we're looking for. He's doing really well. He breezed well, we're happy with it."

McKinzie holds sentimental value to his connections having been named after the late racetrack executive and close friend Brad McKinzie, who attended college with Baffert at the University of Arizona's Race Track Industry Program.

"It's exciting having such a good horse named after our dear friend Brad McKinzie and his mother is still alive and so it keeps her going," Baffert said. "She loves watching him run and it brings a tear to her eye when he runs. There's a little added pressure when he runs. When you have a nice horse like this it's so enjoying. Like his namesake, the horse has a great personality and when he performs, we're always thinking of Brad."

Hall of Fame jockey Mike Smith, who piloted Baffert's Mor Spirit (2017) and Holy Bull (1994) to Runhappy Met Mile triumphs, will return to the irons from post 3.

Fresh off the best performance of his career in the Grade 1 Runhappy Carter is Vekoma, who registered a 110 Beyer for the 7 1/4-length victory in the seven-furlong event at Big Sandy.

The Runhappy Carter marked the first Grade 1 victory for the George Weaver-trained Candy Ride chestnut colt, following a successful seasonal bow in the Sir Shackleton at Gulfstream Park. Also a graded stakes winner at ages 2 and 3, Vekoma won the 2018 Grade 3 Nashua at Aqueduct following a win on debut and took the 2019 Grade 2 Blue Grass last April at Keeneland en route to a 12th-place finish in the Grade 1 Kentucky Derby.

Owned by R. A. Hill Stable and Gatsas Stable, Vekoma was bred in Kentucky by Alpha Delta Stable and is out of the Speightstown broodmare Mona de Momma, who also was a Grade 1-winner going seven furlongs.

Hall of Fame jockey Javier Castellano piloted subsequent champions Ghostzapper (2004) and Honor Code (2015) to Met Mile triumphs and seeks his third victory in the race aboard Vekoma from post 2.

Bakster Farm's Mr Freeze has come close to Grade 1 success in the past but will try to secure his first victory at such caliber for trainer Dale Romans, who trained 2012 Met Mile champ Shackleford.

Mr Freeze notched two of his three graded stakes wins going the one-turn mile when taking the Grade 3 Ack Ack on September 28 at Churchill Downs and the Grade 2 Gulfstream Park Mile two starts back on February 29.

No stranger to Grade 1 success at Belmont Park, Hog Creek Hustle will attempt to find the winner's circle for the first time since an 18-1 triumph in the Grade 1 Woody Stephens last June over Big Sandy.

Trained by Vickie Foley, the Something Special Racing-owned 4-year-old son of Overanalyze has maintained a consistent record since then having placed in four of his seven starts since striking Grade 1 gold.

Trainer Brad Cox will attempt to win his first Met Mile when he saddles the frontrunning Warrior's Charge, who arrives off a second-place finish to By My Standards in the Grade 2 Oaklawn Handicap on May 2.

Owned by Ten Strike Racing in partnership with Sol Kumin and Jason Monteleone's Madaket Stables, Warrior's Charge led at every point of call in his only graded stakes victory two starts back in the Grade 3 Razorback on February 17 at Oaklawn Park.

In nine career starts, the dark bay son of Munnings has only finished off the board once when running a game fourth to War of Will in last year's Grade 1 Preakness Stakes, which came after a maiden special weight and optional claiming victories at Oaklawn Park by open lengths.

No horse since 1983 winner Star Choice has won the Met Mile without having already won a graded stakes race, but Network Effect will step up to the task for four-time Eclipse Award-winning trainer Chad Brown.

The three-time graded stakes placed son of Mark Valeski was a distant second to Vekoma in the Grade 2 Carter last out. Owned by Seth Klarman's Klaravich Stables, Network Effect has only been worse than second once in eight starts, which was a distant eighth in last year's Grade 1 Cigar Mile. Second in the Grade 3 Nashua and Grade 2 Remsen at Aqueduct as a juvenile, Network Effect defeated winners in November going the one-turn mile at the Big A three starts before becoming a stakes winner against fellow Florida-breds in the Big Drama at Gulfstream Park.

Jockey Irad Ortiz, Jr. will be aboard Network Effect from the inside post.

Godolphin homebred Endorsed, a 4-year-old Medaglia d'Oro colt trained by Hall of Famer Bill Mott, earned a career-best 100 Beyer Speed Figure last out in a runner-up effort in the Grade 3 Westchester. Out of 2012 Grade 1 Gazelle winner Dance Card, Endorsed boasts a record of four wins and two seconds from nine starts. He will be searching for his first career stakes win when leaving post 6 under Joel Rosario.

The Runhappy Met Mile has developed the reputation of being an important breeding-value enhancer potential stallion prospects. Many recent winners of the event have gone on to become Grade 1 and/or champion-producing sires such as Honor Code (2015), Palace Malice (2014), Shackleford (2012), Quality Road (2010), Divine Park (2008) and Ghostzapper (2005).

*Rating is based on HRN fan votes, which rank the Top Active Horses in training.
Belmont Park Metropolitan Metropolitan (2020)