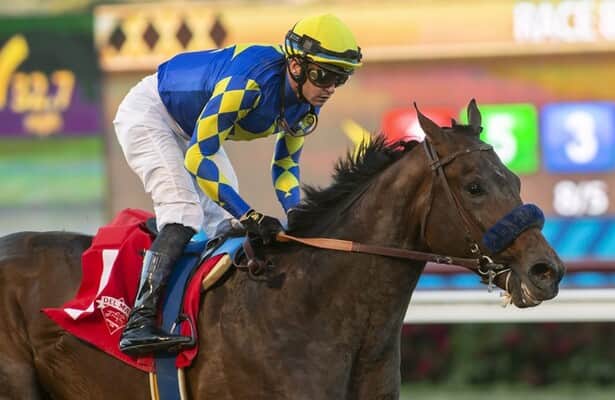 “We were in a good spot,” Prat said. “There was plenty of pace in the race and that was to our advantage. When I asked, he was there, and I think this horse will be fine with running on.”

Messier gains ground in the turn and draws clear in the stretch under Flavien Prat to win the GIII Bob Hope Stakes. pic.twitter.com/hacovFHSRc

“Messier shipped down (from Santa Anita on Sunday) morning,” Baffert said. “He didn’t train here during the summer and had never been here. First time on a trailer, first time he’d seen Del Mar, and he walked into the paddock like he owned it. The track is pretty glib, so the fractions were fast. In the summer, 21-and-4 wouldn’t hold up, but this time speed carries, and they were rolling.”

Messier, a Canadian-bred named for Hall of Fame hockey player Mark Messier, scored his first stakes triumph in his third start. The $60,000 winner’s share of the purse increased his earnings to $105,600. He returned $4.40 and $2.60. Forbidden Kingdom paid $4 to place. There was no show wagering.

The track’s Pick 6 single-ticket jackpot wager carried over once again and has risen to $245,884. It will be in the pool to start the wagering when racing returns on Friday.