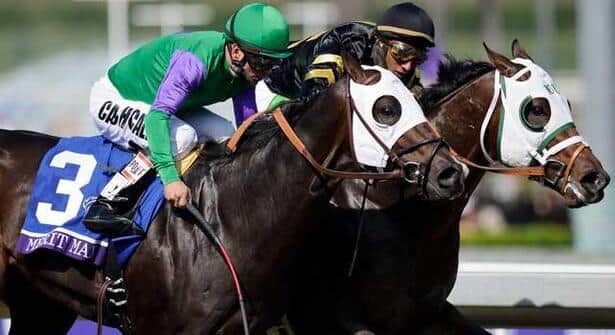 Bruce Chandler, Robert McKee and James Glavin’s Merit Man is just a nose short of being perfect in four starts for trainer Bob Hess, Jr. But the 3-year-old will have to travel a furlong farther than he has before when he goes to the post as the favorite in Saturday’s $150,000 Hutcheson Stakes (G2) going seven furlongs at Gulfstream Park.

Jockey Paco Lopez gets the call on Merit Man in the field of 10 3-year-olds after the Florida-bred son of With Distinction won the $100,000 Spectacular Bid Stakes going six furlongs here on New Year’s Day by three-quarters of a length.

Merit Man made three starts in California last year, beginning with his winning debut at Del Mar on Sept. 2, followed by a 5 ½ lengths score in the $100,000 Tim Conway Stakes on Oct. 6 at Santa Anita before a tough nose loss when second to longshot Hightail in the $500,000 Breeders’ Cup Juvenile Sprint as the 1-to-2 favorite.

“I was happy his race in the Spectacular Bid, although he ended up on the lead from the one post, which wasn’t ideal.” said Hess as he accompanied the colt to school in the walking ring during the fifth race Wednesday. “He was hooked and was very game to go on from there. He doesn’t need to be on the lead. I’d rather see him sit and stalk. He’s got a better post for this race (5).

“I think he will have to improve from the Spectacular Bid to handle the competition he’ll face in the Hutcheson. I’m not really worried about the seven furlongs. I think anything up to a one-turn mile is well within his range.”

Swifty Farm’s Pataky Kid is an accomplished contender with jockey Corey Lanerie to ride for trainer Tom Proctor in his first start since finishing fifth in the one-mile Iroquois Stakes (G3) at Churchill Downs on Oct. 28. The Oklahoma-bred son of Rockport Harbor worked a ‘bullet’ half-mile in 46 3/5 Wednesday morning.

Pataky Kid finished third in his debut at Churchill on July 1 before breaking his maiden and capturing the Arlington-Washington Futurity (G3) at Arlington Park over the summer. In one more start before the Iroquois he finished an even fourth in the Breeders’ Futurity (G1) at Keeneland, those last three races run on Polytrack.

“He’s got ability, but he’s a little quirky kind of horse,” said Proctor. “We’re looking for this race to get him started and see where we go from there. We still don’t know whether he’ll be best on dirt, ‘Poly’ or maybe even grass. We tried blinkers on him for the Iroquois and he didn’t break. They do that sometimes the first time with blinkers.”

Trainer Todd Pletcher sent out Thunder Mocassin to win the Hutcheson last year and also won the race a remarkable five straight times from 2003-07. Gulfstream’s leading trainer appears to have another promising prospect for this renewal in Perretti Racing Stable’s Forty Tales with jockey John Velazquez to ride. The son of Tale of the Cat has won his only two starts – his debut at Aqueduct on Nov. 24 by 2 ¾ lengths and an allowance at Parx no Jan. 5 by 3 ¾ lengths.

James Covello and Newtown Anner Stud’s Falling Sky makes his first start for new connections Saturday with jockey Luis Saez to ride for trainer John Terranova. The son of Lion Heart was a sharp allowance winner going six furlongs on Dec. 15 for trainer Antonio Sano and was consigned to the OBS January Mixed sales where he was purchased for $425,000.

“We’ve had him up here at Palm Meadows for a couple of weeks and he’s doing well. He’s talented and ran in some key races,” said Terranova, referring to the fact that Majestic Hussar and Singanothersong each won their next starts here after finishing second and third to Falling Sky in the Dec. 15 allowance.

Two other contenders that deserve respect are Herman Van Den Broeck’s Singanothersong and James Bucci’s Honorable Dillon, who finished one-two, separated by three-quarters of a length in a 6 ½-furlong allowance race over the track on Jan. 4. Jockey Jozbin Santana has the mount on Singanothersong for trainer Ron Pellegrini and Joe Rocco, Jr. gets the call on Honorable Dillon for trainer Eddie Kenneally.

Singanothersong is a veteran of eight races now, including a third-place finish behind Brave Dave and Sr. Quisqueyano in the Birdonthewire Stakes at Calder in late September. The homebred son of Songandaprayer went wire-to-wire in the Jan. 4 victory after a good third in a previous allowance here on Dec. 15.

Honorable Dillon was the 13-to-10 favorite when second to Singanothersong as he was making his third start and first since breaking his maiden at Saratoga on Aug. 25 following a third-place debut at the Spa. The roan/gray son of Tapit rallied from fifth of six in the Gulfstream allowance and should benefit for the effort.

“I think he needed his first race and will move forward from it,” said Kenneally. “That’s about the way it worked for him at Saratoga last year. He finished third in his first start and then improved to win his second start impressively.”

Not to be overlooked in the Hutcheson is Silverton Hill LLC’s Little Distorted with jockey J.L. Castanon in the saddle for trainer Darrin Miller. The son of Distorted Humor created a buzz when he won his debut at Belmont Park in late October by 2 ¼ length for previous connections and was sold privately shortly thereafter. In his lone start since then he finished third, beaten 5 ¼ lengths as a slight favorite behind Merit Man in the Spectacular Bid.