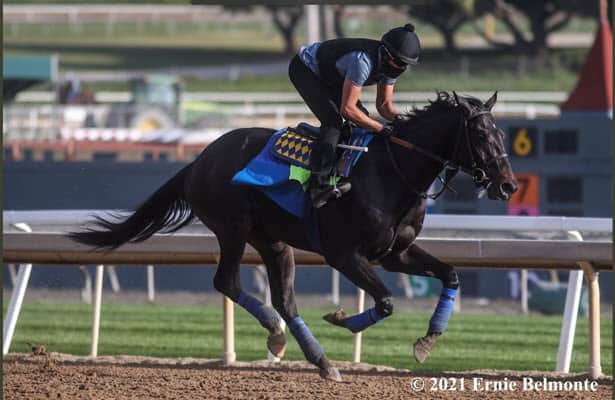 Medina Spirit, a game second to undefeated Rock Your World in the Santa Anita Derby (G1) on April 5, worked five furlongs this morning in a minute flat as Bob Baffert prepares the $35,000 bargain son of Protonico for the Kentucky Derby on May 1.

Work of the Day from @santaanitapark, Medina Spirit (Outside) and Paint Me Lucky worked 5 Furlongs on April 16th, 2021, for trainer @BobBaffert. Medina Spirit is expected to make his next start in the Kentucky Derby. @1stbet pic.twitter.com/NU6FfYeXUj

“He worked five eighths, galloped out strong and looked good,” said Baffert, who swept the Triple Crown with American Pharoah in 2015 and Justify in 2018 and seeks his seventh win in the Run for the Roses, which this year Baffert said “looks very wide open.”

Medina Spirit will leave for Kentucky “either Friday (April 23) or Sunday (April 25),” Baffert said. “I’m not sure yet.”

Meanwhile, a decision on Concert Tour’s participation in the Kentucky Derby remained on hold, even though the bay son of Street Sense is already in the Blue Grass State.

Concert Tour was a disappointing third as the 3-10 favorite in last Saturday’s Arkansas Derby, but whether he starts in the first leg of the Triple Crown remains undecided.

“Nothing yet,” said Baffert, who trains Concert Tour for owners/breeders Gary and Mary West. “I’ll be talking to Gary, but we wanted to give the horse a week and see what’s happening.

“He looks good but there’s no decision yet.”