Medina Spirit to run in Preakness after agreement reached 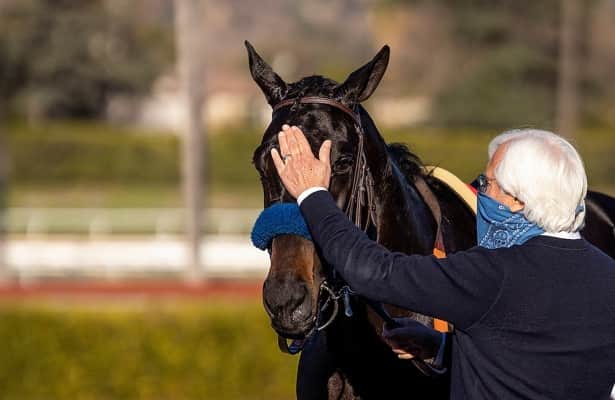 Kentucky Derby winner Medina Spirit will start in Saturday's Preakness Stakes after an agreement was reached between trainer Bob Baffert and the Maryland Jockey Club on Tuesday.

The post-position draw is scheduled for 4 p.m. EDT Tuesday.

[Related: Baffert says positive might be from anti-fungal treatment]

Here is the text of a letter from Baffert's Kentucky attorney, Craig Robertson, to Alan Rifkin, attorney for the MJC.

"In the best interest of horse racing, and the integrity of the sport, Mr. Baffert consents to blood testing, monitoring and medical record review by the Maryland Jockey Club ('MJC') on the horse Medina Spirit, and two other horses trained by Mr. Baffert. Medina Spirit and Concert Tour are presently entered in the Preakness Stakes and Beautiful Gift is presently entered in the Black Eyed Susan Stakes.

"In addition to the testing and monitoring conducted by the Maryland Racing Commission ('MRC') and/or in cooperation with the MRC, the horses were tested upon arrival at Pimlico and further blood samples will also be drawn today and as may be further determined by MJC from each of the horses. The MJC blood samples will be tested by a lab chosen by the MJC.

"Consistent with the fair procedure process provided by The Stronach Group, Mr. Baffert consents to information regarding the results of the MRC and MJC tests, and other relevant medical and administrative records relating to the horses being disclosed to the MJC and Dr. Dionne Benson, The Stronach Group Chief Veterinary Officer.

"If any of the three horses test positive for a banned substance, or at a level for a permitted therapeutic substance which is above the designated limit, or if reasonable conditions warrant after MJC's review of the medical or administrative records, Mr. Baffert, or MJC on his behalf, will scratch that horse from the upcoming race in which that horse is entered this weekend at Pimlico. Mr. Baffert has given these consents to further the interests of horse racing and the public.

"The integrity of the sport is of the upmost importance to Mr. Baffert and by consenting to this testing regimen and monitoring he reaffirms his commitment and dedication to the sport."

Craig Favel, CEO of 1/ST Racing, said in a news release: “Integrity, accountability and safety in our sport are principles that 1/ST Racing puts above all else. Our company has a track record of instituting process and protocols that have led to nationwide medication reforms and we are unwavering in our commitment to put horse and rider safety at the forefront.

“We are well aware of the public outcry and calls for action that have been the natural outcome of a medication positive in one of the most iconic races in our sport, and we share the disappointment and concern.

"We are required to acknowledge in this instance that fundamental fairness compels us to respect the individual rights of participants in our sport to due process and adherence to agreed-upon and well-established rules. To this point, there has to our knowledge been no split sample testing as is required in every state in this country and no complaint or other official action has been announced by the Kentucky Horse Racing Commission with regard to this incident. While the integrity of our sport is of utmost importance it is the responsibility of those in authority to follow the rules even as we seek to enforce them. We cannot make things up as we go along and we trust that the competitors, bettors and fans will understand the importance of adhering to that principle.”

Amid the negotiations, Medina Spirit blissfully went about his business of being prepared to continue a Triple Crown quest that might be only as good as the result of a second sample from his post-Derby drug test to see whether the legal anti-inflammatory medication showed up again at a level exceeding Kentucky limits.

“He feels very good,” assistant trainer Jimmy Barnes said. “He had high energy this morning. I think he looks great.”

Working with exercise rider Humberto Gómez, Medina Spirit jogged a mile around the main track shortly before stablemate Concert Tour did the same thing. So did Beautiful Gift, Following Sea and Hozier, the other three horses from Bob Baffert’s barn who are racing this week at Pimlico.

“Everyone looks wonderful,” Barnes said. “I couldn’t be happier.”

One by one, Gómez rode a mile on each of the five horses representing Baffert, who decided not to come to Baltimore because of the attention being paid to the controversy.

In a conversation more in keeping with a normal Preakness, Barnes said the impact of the short, two-week turnaround from the Kentucky Derby remains a question mark for Medina Spirit.

“You never know how much it took out of him,” Barnes said. “He certainly wasn't tired out after the race. We’ve had other horses that lay down for a couple days, but he was on his toes and he ate his feed, and we just moved forward.”

Barnes said all five horses did some gate schooling at Churchill Downs before they were vanned Monday on the 600-mile journey from Louisville, Ky., to Baltimore. Otherwise, he said, he expected to jog them every day between now and their various post times.

“We’ll walk them over the paddock probably before they race,” Barnes said. “That would be about the extent of it.”

While Medina Spirit was finishing first in the Kentucky Derby, Concert Tour bided his time in his barn at Churchill Downs. When the Preakness starts, he will have had five weeks since his last start.

“It always helps to have a couple extra weeks in between races,” Barnes said. “He’s kind of a light horse, so he got his weight picked back up. His energy levels look great. He should be a fresh horse, and that was basically the idea of skipping one and going to the next. You get two more weeks, and you have a little bit fresher horse.”

Barnes hopes the extra rest helps Concert Tour's comeback from a third-place finish in the Arkansas Derby (G1), a perplexing performance that left Baffert grasping for an explanation. The same goes for Barnes.

“He broke sharp,” Barnes said. “He should have just gotten in front of that other horse (Caddo River). Maybe they didn’t want to get in a speed duel. I understand that.”

Joel Rosario, who rode Concert Tour in his three triumphant starts as well as the Arkansas Derby, has been replaced by Mike Smith for the Preakness. John Velázquez will maintain his ride on Medina Spirit.

Ron Flatter also reported from Baltimore for this story.