Medina Spirit is all but in Penn Derby, but 1 rival is out 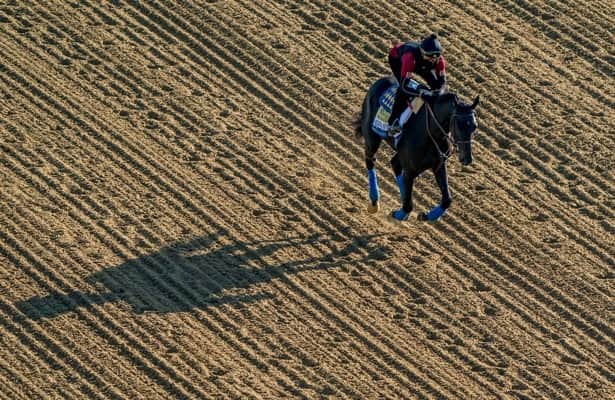 Even though trainer Bob Baffert said he is “not sure yet,” Medina Spirit’s participation in next Saturday’s Grade 1, $1 million Pennsylvania Derby is already etched into jockey John Velázquez’s book.

Not so, though, for leading 3-year-old Essential Quality.

Asked if he expected to ride Medina Spirit next weekend, Velázquez said, “I believe so,” in a text message to Horse Racing Nation on Saturday night.

“I’m anticipating him coming,” Velázquez’s agent Ron Anderson said in a Saturday telephone conversation. “I’m planning on him to be there.”

Baffert said in a Saturday afternoon text that he “should know by Monday” if the disputed winner of the Kentucky Derby will be shipped to Parx Racing for the 40th renewal of the track’s main event.

Belmont Stakes and Travers (G1) winner Essential Quality, whose only loss was his fourth-place finish to Medina Spirit in the Kentucky Derby, was ruled out by trainer Brad Cox. He said Saturday night at Churchill Downs that Essential Quality would train right up to the Breeders’ Cup Classic on Nov. 6 at Del Mar.

Cox said he would probably decide Sunday whether two-time Grade 3 winner Fulsome would go to the Pennsylvania Derby.

Hot Rod Charlie, second to Essential Quality in a thrilling finish at the Belmont, was confirmed by trainer Doug O’Neill to have his name in the entry box Monday at 2 p.m. EDT, when the 1 1/8-mile race is drawn.

Anderson said his other client, Joel Rosario, is booked to ride Keepmeinmind, who finished fourth last month in the Travers.

“Joel will be there for (Robertino) Diodoro,” said Anderson, who added that Rosario will also ride Iowa Oaks (G3) winner Army Wife that day in the $1 million Cotillion (G1) for 3-year-old fillies.

Midnight Bourbon, who finished second in the Travers, is not yet confirmed for the Pennsylvania Derby. Stablemates Clairière and Pauline’s Pearl are also not certain to go in the Cotillion.

In his third race since he won the Kentucky Derby, Medina Spirit will command most of the attention. After finishing third in the Preakness, he got a 3 1/2-month break before winning Aug. 29 in the $100,000 Shared Belief Stakes at Del Mar. He went 1:12.6 going six furlongs Friday morning at Santa Anita, the fastest of five workouts at that distance.

Medina Spirit’s Kentucky Derby victory was brought into question eight days after the race when Baffert confirmed a positive test for betamethasone. With Baffert saying there was no intent to illegally medicate the colt, the urinalysis has been the centerpiece of a court fight in Kentucky. It also prompted Churchill Downs to ban Baffert and his horses for the next two years and declare them ineligible for the Derby.

The drug positive triggered a similar suspension by the New York Racing Association. That was overturned when Baffert and his legal team won an order from a federal judge, who said NYRA did not provide the Hall of Fame trainer due process. In answer to that, NYRA last week called Baffert to a Sept. 27 hearing to make his case for why he should not be banned.