Baffert won’t be ‘distraction,’ will skip trip to Preakness 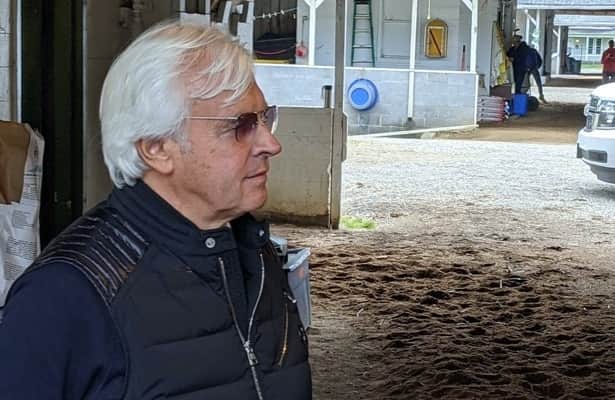 While the sport of racing continues to deal with storm clouds over Bob Baffert’s barn at Churchill Downs, a chilly almost eerie quiet came Monday with the start of Preakness Stakes week at Pimlico. A quiet that Baffert said he will not interrupt.

His tenuous Kentucky Derby winner Medina Spirit was due to arrive Monday afternoon with stablemate Concert Tour at the end of their 600-mile van ride from Kentucky. Their embattled trainer, though, will not be in tow.

That was what Baffert texted from Kentucky on Monday when asked if he would be coming to Baltimore to see what could be his record eighth Preakness victory.

In a follow-up phone conversation with Horse Racing Nation, Baffert said, “I don’t want to be a distraction to the horses. I’d love to be there. I was looking so forward to it. We were going to have fun. My boys were coming. My brother was coming. We were going to go out there and hang with Michael Lund (Petersen), who owns Gamine. He lives up there. But the scene is going to be different.”

By going back to California, he will also avoid a media free-for-all had he shown up to face more questions about Medina Spirit testing positive after the Derby for a trace overage of the betamethasone. That is an anti-inflammatory medication that Baffert denied giving to the colt.

Baffert did not shut the door completely, though, on changing his mind.

“People are still trying to talk me into going,” he said. “I don’t know. I’ve got until (Tuesday) when I’ve got my flight. So I don’t know.”

While assistant Jimmy Barnes will look after Medina Spirit and Concert Tour, the management of Pimlico Race Course has yet to decide whether to follow Churchill Downs’ lead and suspend Baffert or even deny Medina Spirit’s entry into the Preakness.

The Stronach Group and Maryland Jockey Club said in a statement Sunday they “intend to review the relevant facts and information. We are consulting with the Maryland Racing Commission, and any decision regarding the entry of Medina Spirit in the 146th Preakness Stakes will be made after review of the facts.” A spokesman for the MJC said Monday he did not know when that review might be completed.

The executive director of the Maryland Racing Commission said his group is staying out of the controversy. For now.

“It’s not our case,” Mike Hopkins said when asked by Horse Racing Nation if the commission would act against Baffert. “It hasn’t been proven yet. He’s still got due-process rights. There’s nothing that would make (Medina Spirit) ineligible to run. The Preakness will be business as usual as far as we’re concerned.”

Baffert’s attorney Craig Robertson told the Daily Racing Form that if Medina Spirit were to be denied the chance to run in the Preakness, he would go to court and ask for a temporary restraining order to get the colt in the race.

For now Medina Spirit is still eligible to continue his quest for the Triple Crown, because he has not been stripped of his Kentucky Derby victory. That could not happen before a second sample of his post-race drug test was tested. Baffert has asked for the test in order to clear his name – and Medina Spirit’s – but that could take weeks.

Although he was adamant that he and his team never administered betamethasone to Medina Spirit, Baffert would not indulge in speculation about who might have done it.

“There’s no speculation right now,” he said. “We don’t know anything yet. The process means we find out as we go along. That’s why confidentiality is so important. So far we have found nothing on our side that we did anything. Nothing.”

The medication question led the Maryland Jockey Club to postpone the Preakness draw from Monday to Tuesday. The filling of Friday’s card was also pushed back, from Sunday to Monday, because Baffert planned to enter Beautiful Gift in the Black-Eyed Susan (G2). He also has Following Sea targeted for the Chick Lang (G3) and Hozier for the Sir Barton, both Saturday.

Medina Spirit, Concert Tour and the other Baffert horses will be part of a wave of shippers arriving at Pimlico in the next 24-48 hours. The Preakness horse that came farthest, though, was on the track for the first time at mid-morning Monday.

France Go de Ina, who made the trip from Japan last week to start his quarantine time in California, got his first look at the track Monday morning with exercise rider Masaki Takano in front of a dozen members of the media.

“Just a light canter around the track to stretch his legs after clearing quarantine,” said Kate Hunter, the Japan-based native of Tennessee who is serving as the Will Take Charge colt’s liaison. “He needed to stretch out before we do anything more serious. We’ll gradually build him up before he breezes on Wednesday.”

The winner of nine-furlong maiden and allowance races, France Go de Ina finished sixth last out in a Grade 2 race March 27 covering the Preakness distance of 1 3/16 miles, France Go de Ina must remain by himself both on the track and in a quarantine barn right up to post time Saturday.

“Typically that doesn’t apply to training times,” Hunter said, “but for whatever reason the U.S. Department of Agriculture is adhering to the rules in the strictest sense, which means he needs to be isolated from all other horses. That means he’s training after all the other horses get off the track.”

Trainer Hideyuki Mori arrived in Baltimore at midday Monday after his long flight from Japan. Hunter said Mori planned to look in on France Go de Ina late Monday afternoon. Joel Rosario has the ride in the Preakness.

Presuming Medina Spirit is allowed to race, 10 horses are expected to be entered for the Preakness. Wednesday’s 4 p.m. EDT draw will be streamed live at Facebook.com/Preakness.