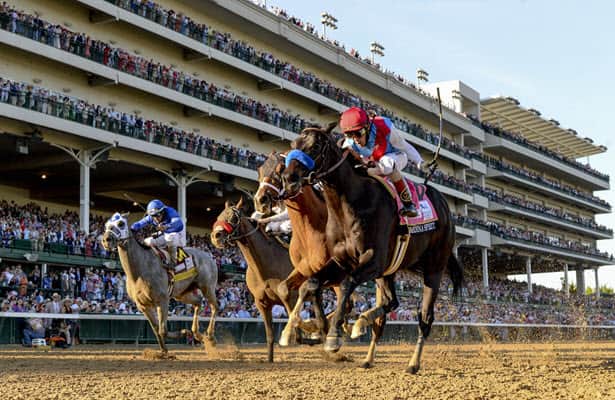 The Hall of Fame conditioner scored his seventh Kentucky Derby triumph Saturday as Medina Spirit led gate-to-wire at Churchill Downs. Baffert passed Ben Jones, who he tied last year for the all-time mark in Derby victories by a trainer.

The 147th Running of the @KentuckyDerby @ChurchillDowns presented by @WoodfordReserve is won by Medina Spirit w/ 4x #KyDerby winning jockey @ljlmvel aboard.

"It was a thrilling win," Baffert said after the Florida-bred Medina Spirit, who was once auctioned for $1,000, scored the trainer's record seventh Derby victory. "For this little horse, what he did today, he has so much of Silver Charm in him. Such a fighter."

Baffert broke the Kentucky Derby record on the same day he passed D. Wayne Lukas on the list of Grade 1 victories when Gamine scored his 220th. He now owns 221 such wins.

Velazquez won the Derby for the fourth time, having also scored aboard Animal Kingdom (2011), Always Dreaming (’17) and Authentic. He also became the first jockey since Calvin Borel in 2009 to pull off a Kentucky Oaks-Kentucky Derby double, having won Friday's Oaks aboard Malathaat.

Medina Spirit entered off a second-place run to Rock Your World last month in the Santa Anita Derby. His only prior stakes win came in January at Santa Anita in the Robert B. Lewis (G3).

Velazquez won last year’s Kentucky Derby by working Authentic in from an outside post and making the lead, then turning back a stretch challenge from Tiz the Law. He did not have to come from as far outside Saturday, breaking from Post No. 8, and was able to put Medina Spirit at the front of the field.

Like last year, it was the Baffert-trained colt with Velazquez up prevailing by in a stretch duel. Medina Spirit scored by a half-length over Mandaloun.

"I knew he was going to fight anyone who came to him, and he did today," Velazquez said.

Mandaloun was second by another half-length over Hot Rod Charlie, who was a head clear of fourth-place Essential Quality.

Owner Zedan Racing Stables purchased Medina Spirit for $35,000 in a July 2020 sale. The Protonico colt previously sold for $1,000 as a yearling.

“We had a good trip,” jockey Flavien Prat said “We were in super position. I was right behind the speed and I was traveling well. Turning for home I thought I had my chance to go by them and they just had just pushed him. But he ran a huge race.”