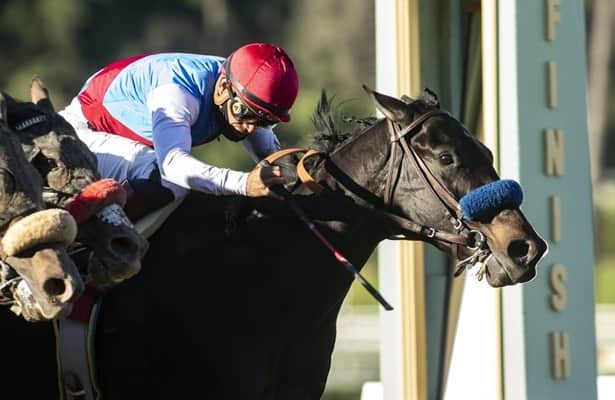 The news was first reported by Bill Finley of the Thoroughbred Daily News.

Robertson later issued a statement from Baffert confirming the colt’s death was from an apparent heart attack after he had completed a five-furlong workout.

“Medina Spirit was a great champion, a member of our family who was loved by all, and we are deeply mourning his loss,” Baffert said in the statement.

Medina Spirit's Kentucky Derby victory has been in dispute because of a finding of betamethasone in a post-race drug test. Baffert claims it was administered topically for a skin condition, rather than injected as an anti-inflammatory.

The Protonico colt won his only race in 2020 and had a record this year of 9: 4-4-1. Other graded-stakes wins came in the Robert B. Lewis (G3) and the Awesome Again. He finished second to Knicks Go in the Breeders' Cup Classic last month.

Bred by Gail Rice, out of Mongolian Changa, Medina Spirit initially was a $1,000 purchase by pinhooker Christy Whitman. Bought by Zedan Racing Stables at the 2020 Ocala Breeders’ July 2-year-olds and horses of racing age auction for $35,000, Medina Spirit had career earnings of $3,545,200.

Related: Breeder: Medina Spirit was the realization of a dream

Rice told told HRN she was deeply saddened by the colt’s passing.

“My lasting memory of him is when I kissed him in the winner’s circle at the Kentucky Derby,” Rice said. “That to me was like the culmination of everything a breeder is hoping for in their life.”

Santa Anita and the California Horse Racing Board both issued statements outlining the next steps for investigating Medina Spirit's death.

"All horses that die within facilities regulated by the California Horse Racing Board undergo postmortem (necropsy) examination at a California Animal Health and Food Safety diagnostic laboratory under the auspices of the University of California," the CHRB statement read. "Cause of death cannot be determined until the necropsy and toxicology tests have been completed"