Medina Spirit: What is an Eclipse Award voter to do? 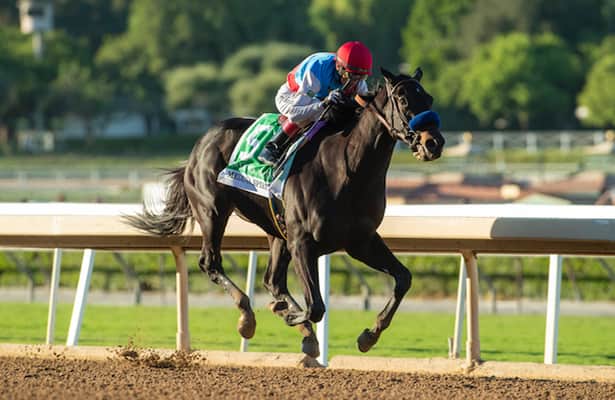 Medina Spirit’s sudden, shocking death after a Santa Anita workout Monday leaves many analysts in a quandary concerning his legacy.

While Eclipse Award voters wait and wait for regulators to determine whether the star-crossed colt should be disqualified from the Kentucky Derby for a positive drug test, can the star-crossed colt posthumously receive the Eclipse Award as champion 3-year-old? Whatever the Derby outcome, will history ultimately celebrate Medina Spirit as an initial $1,000 purchase whose huge heart allowed him to overcome humble beginnings? Or will it all but dismiss him because of the actions of besmirched trainer Bob Baffert?

[Medina Spirit was the realization of a dream for his breeder]

The Derby winner – innocent until proven guilty – raced nine times this season. He won four and ran second on four occasions with one third-place effort for earnings of $3,520,000. Essential Quality stepped into the starting gate seven times. He prevailed five times – with rousing Belmont Stakes and Travers (G1) triumphs that surely resonate with voters – while banking $100,000 less than his rival.

If the deafening silence from regulators continues, what is an Eclipse voter to do? TVG’s Scott Hazelton readily admits he is decidedly undecided.

“I don’t know what the right answer is,” he acknowledged. “Truthfully, in my time in this sport, covering it for close to two decades, I can’t think of another situation to fall back on, to reference ‘How was this handled?’ I’d love to have some historical perspective on that.”

The Daily Racing Form’s Jay Privman has grown weary of waiting for a judgment on a race that occurred the first Saturday in May, no matter how thorny the issues may be. “I don’t know why this or similar situations take so long,” he said. “It’s detrimental to the sport and all the parties involved in the process, be it the horse in question and those associated with him and the runner-up (Mandaloun) who could be the Derby winner when all is said and done. I don’t think it’s fair to either party. It shouldn’t take this long. It just shouldn’t take this long.”

The Thoroughbred Daily News’ Bill Finley is prepared to render his decision. When he was asked about the late Medina Spirit’s merits, he responded, “He could emerge as leading 3-year-old. I won’t vote for him, though. It has nothing to do with the Kentucky Derby. I’m willing to give him credit for the Derby win as long as it is not officially taken away by the time the votes are in. But, comparing his record to Essential Quality, I think Essentiall Quality had the better year.”

Bob Ehalt, senior correspondent for BloodHorse, also concurred. “I think Essential Quality’s body of work was the best throughout the entire year,” he said, adding, “scratching out of the Pennsylvania Derby for an easier spot didn’t help his cause.”

Baffert opted to pass on the $1 million Pennsylvania Derby (G1) to send his 3-year-old against older horses in the $300,000 Awesome Again (G1) at Santa Anita. Medina Spirit romped by five lengths against suspect competition.

Flatter also said a vote for Essential Quality would not be a vote to punish Baffert. "I voted for Maximum Security when he won the 2019 Eclipse as 3-year-old male champion. I did not punish him for being disqualified in the Derby, and I felt his body of work inclusive of that was worthy of the award. Using the same prism, I would not punish Medina Spirit for being under the care of Baffert any more than I would penalize Corniche. And I intend to vote for Corniche to be 2-year-old male champion. I am trying to grade the horse rather than punish the human."

NBC’s Randy Moss noted that the saga of Medina Spirit touched him the way few horses have.

“In my profession, you don’t root for horses generally. But I found myself rooting for Medina Spirit after the Kentucky Derby because of everything that horse was being asked to overcome,” he said. “Nobody wanted him as a young horse. He initially sold for $1,000. I paid more for my last iPhone than that. In his barn, he didn’t get the respect he deserved. At the Kentucky Derby, Baffert didn’t think Medina Spirit had a chance to win.

“After that display of sheer guts in the Derby, when the test came back positive, the president of the United States called Medina Spirit a junkie. People who don’t know anything about the sport assumed he won the Derby because he was drugged, when nothing could be further from the truth.”

Moss emphasized that 21 picograms of the steroid betamethasone constitutes an incredibly small amount. “According to anybody who knows anything about veterinary science, that had absolutely zero impact on the way the horse performed in the Kentucky Derby,” he said. Baffert has said that betamethasone appeared in a topical ointment he used to treat a skin condition.

Said Privman: “You’re not allowed to have that medication on race day, regardless of how it got there. And I do believe it was an error of sloppiness or carelessness as opposed to something nefarious.”

Hazelton said he will always view Medina Spirit as a “brilliant racehorse.” Moss will always wonder what might have been if the horse was given the opportunity to prove himself on an international stage such as the Saudi Cup and in the major races for older horses in the U.S.

“It is sadly ironic that a horse that is known far and wide for his heart,” Moss said, “would die because of what is believed to be a heart problem.”